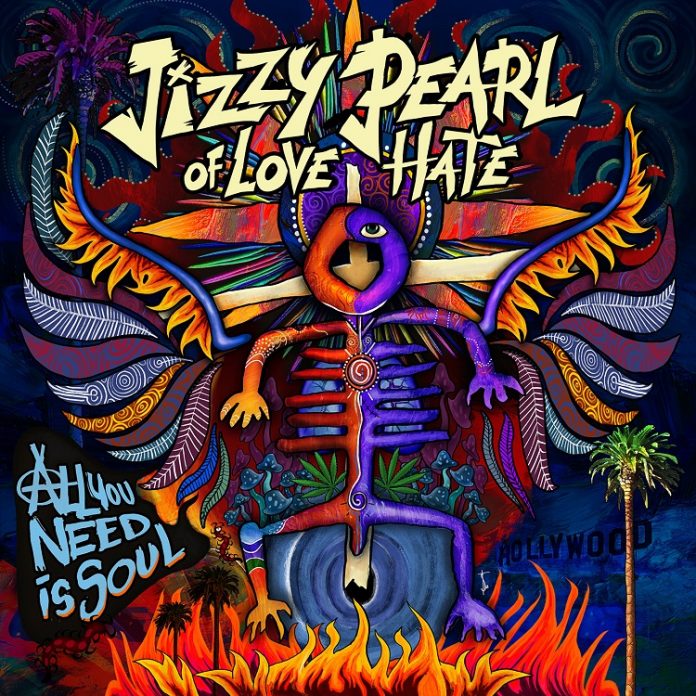 Over the years you certainly can’t accuse Jizzy Pearl of not keeping the legacy of his band Love/Hate alive. One of the true cult acts, you probably had to be alive in the early 90s to understand the majesty of their debut “Blackout In The Red Room” album. The last few summers Jizz has merrily marched round the UK armed with their (hell, his) songs and it’s all been very decent nostalgia (at this point I should probably add the disclaimer that Love/Hate were the first band I ever saw live, opening for Skid Row when I was 16 in 1991, so you’ll perhaps forgive the rose-tinted specs?)

But the thing about nostalgia is that it needs reinvigorating from time to time, which is where this comes in. The title of the band might hint that this is aimed at Love/Hate fans – in any case Pearl isn’t the most prolific of solo artists anyway, preferring to front incarnations of bands like Ratt, LA Guns and Quiet Riot – but the sound isn’t a million miles away from those days when he was singing in the house band at the Whiskey A Go-Go in LA ( which is where LH started out).

There are a couple of reasons for this. First he has a distinctive voice. There is a moment in the brilliant opener “You’re Gonna Miss Me When I’m Gone” where you think, “yeah only Jizzy can sound like this.” But also there’s a practical reason too, guitars on this are largely supplied by Darren Householder – one of the members of Love Hate in the mid-period (I have his autograph from when I queued up to meet the band in Birmingham’s Virgin Megastore – told you this was personal).

All of which means there is a fair dollop of sleaze around. “Coming Home To The Bone” is essentially ludicrous, but is fun nonetheless, while “High For An Eye” is not only a brilliant song, but moreover a brilliant Jizzy Pearl song. Only he could rhyme like this.

The title track too seems to be deliberately mining that classic sound, while you can analyse “House Of Sin” until last orders are called and still come to the conclusion that it is just a hard rock masterclass and nothing more.

“….Soul” is a vehicle for a fine band. As well as Householder the rest get their moments in the sun. Session drummer extraordinaire Dave Moreno beats the kit to within an inch on “Mortified” while there is a mean bass line on “Frustrated” – a track that melds early Motley and Ratt and comes out with something new –  courtesy of Mark Dutton (both he and Moreno were the rhythm section on Pearl’s “Just A Boy” solo album too).

In fairness to Pearl in amongst all the comfortingly familiar there are some moments that you wouldn’t expect. AIC influences are all over the superb “When The Devil Comes” in addition, on the acoustically led “You Don’t Know What It’s Like” you will be wandering to a very Alice Cooper place, while if you thought the power ballad was dead then listen to “It Doesn’t Matter” and think again.

As if to emphasise the point that it’s 2018 and not 1988, “Little Treasures” ushers itself in on a wave of guitar, and has a strange, almost psychedelic tinge to the harmonies, while the record closes with the punky energy of “Mr. Jimmy” – a reference to The Stones drug dealer in “You Can’t Always Get What You Want” perhaps?– offers the thought “all the good musicians are dead” and proceeds to deal with the onset of the 27 club – the irony that Pearl is still going strong is lost on no-one here.

It is a strident conclusion to a frequently fabulous record. One that Jizzy Pearl needed to make for all kinds of reasons, but one which has the suggestion that whether he’s in Love/Hate or not, that sound will forever been ingrained in him, and right now, few, if any,  can do it better.

Previous article
BAND OF THE DAY: THE AGONY SCENE
Next article
TWO MINUTES FOR MIDATT