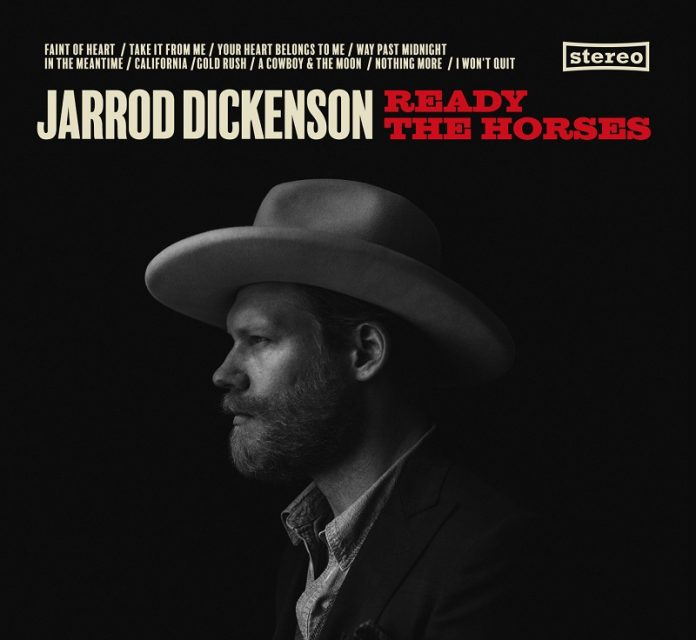 When MV was little, many weekends would be spent at my grandparents’ house, and on a Sunday morning, Gran would always listen to the request show on local radio (before anyone thinks this is idyllic it was taking place in a council house on the outskirts of Stoke On Trent). There’d be loads of old classic songs on there, and country always seemed to feature prominently.

Maybe that’s why “Ready The Horses” resonated somewhere inside.

The cover, deliberately old fashioned. The label, Decca, home to so many of the greats way back when and Jarrod Dickenson himself – and this is meant to be a compliment – doesn’t look like he’s too bothered about modern life either.

It turns out we’re not the only ones who had that thought. As the man himself put it onstage the other week: “We had a really fun few days putting this on tape like in the good old days, that I wasn’t there for.”

If that gives the 10 songs here a warm feel, then the fact this record was recorded in late 2015 (it was originally slated for release in spring this year) means that it is unlike other “new” records in that Dickenson has played these songs for years. That– coupled with the sonic feel – all adds to the thought that “…Horses” isn’t modern at all, rather to listen to it feels like you’re greeting old friends.

“Feint Of Heart” seems to deal with his own struggle: “Oh, keep pushing on through, cos the landlord’s knocking and the rent is due” but does so with a glorious, defiant shuffle and the organ work from Mark Edwards is quite superb here.

“Take It From Me” is as different again. An outright soul song, it deals with the aftermath of a row (“So honey put down those dishes, and put down that vase”) but even so, you know everything will be alright in the morning. With that spirit it sums up the ethic here, this is a record for those that know things are going to get better.

Dickenson often appears live with his wife Claire and she makes an appearance on the gorgeous duet “Your Heart Belongs To Me” which with its fine Lap Steel from JP Ruggieri is a real highlight.

Indeed, Dickenson has surrounded himself with an incredible crop of musicians here, ones who have totally bought into the vibe and got it just about perfect. “Way Past Midnight” for example knows exactly how to find trouble, but does it in a restrained manner in keeping with the record.

JD has a rare gift for soul that isn’t normally prevalent in Americana. “In The Meantime” has a laid-back almost lugubrious way about it, but it is shot through with a steel, and the sense of longing is palpable on “California” which boasts a mighty chorus and would not have been out of place on “Gold” era Ryan Adams.

“Gold Rush”, written with fellow singer/songwriter David Ford draws parallels between the Great Depression and 21st Century Wall Street, over a bluesy groove and odd percussion (instruments listed here include “box of wood”, “box of metal” and “metal tea tray”) but this is followed up with “Cowboy And The Moon” and sees the Texas native cast himself as a wandering country star in the classic mould and instantly we’re back in the kitchen with Gran again.

“Nothing More” is the sort of song that makes sense in the middle of the night when it’s you and the dark, remembering those lost moments, and “I Won’t Quit” almost brings things around full circle. Ostensibly an ode to his wife, it also just might – like “Feint Of Heart” right at the start –  be a note to himself to keep going.

And indeed, he’s come too far to quit now. With “Ready The Horses” Jarrod Dickenson has made something world-weary, yet hopeful. Old time, yet proudly modern. It is these contradictions that make it so wonderful and prove yet again that good things come to those who wait.