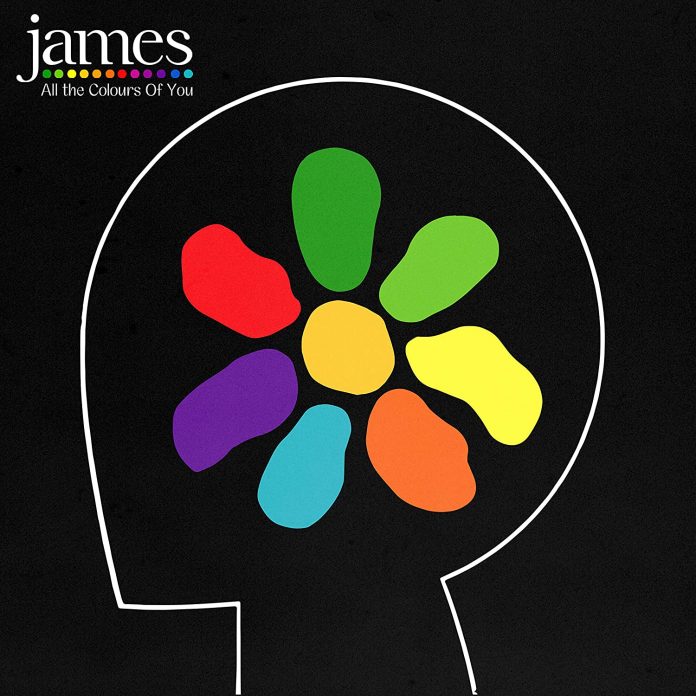 I recently recovered a load of items that had been stored at my sister`s house for numerous years and amid the dusty vinyl and music magazines of the time were various posters. Amongst them was one from The Smiths `Meat Is Murder` tour.

The support were a band called James who Morrissey had been raving about in all the music press. The show was at The Birmingham Hippodrome Theatre, the date, 17th March 1985.  Thirty six years on from that date and that young outfit release their new Long player `All the Colours Of You`, their sixteenth studio album.

The album begins with `Zero` and it`s a disconcerting number to open with as the first line from singer Tim Booth is “we`re all gonna die, that`s the truth” over a strummed guitar and tinkling piano. But I suppose it`s not surprising as a number of these songs came out of the current epidemic and lockdown. It does pick up a little and is obviously an introspective quite reflective outlook on how this crisis has affected the singer, in particular. If there is an upbeat message it`s one of letting go of your hesitancy and just seizing the moment to do all the stuff you`ve put off. It becomes quite anthemic, rising and falling as it progresses and does seem like it`ll be a crowd pleaser in a live scenario. There`s a more upbeat feel to title track `All The Colours Of You` although it addresses the downside of the lockdown and the rise of white supremacy in the US. The singer resides there these days so was able to view at first hand the adverse consequences of Donald Trump`s tenancy.

Synth led `Recover` tells of the death of Tim Booth’s father-in-law to Covid during the first wave in Spring of last year, the lyrics reflecting the pain of those dealing with grief from a distance. A poignant number that retains a hopeful message through celebrating a loved one’s life and their influence. The vast and anthemic `Beautiful Beaches` is what I’d most associate with being a “classic James” number. It was written about climate change and the fires that ravished California. A track made for sharing with an audience with some manic drumming towards the end.

`Wherever It Takes Us` has a sort of disco vibe with some delightful chorus harmonies and a questioning, searching almost spoken word vocal delivery that put me in mind of Talking Heads classic `Once In A Lifetime`. There`s a more mesmerising ambient reflective texture to `Hush` which I have to say allows the singer to showcase how good his vocal still is.

`Miss America` apparently examines that country’s damaged image through the prism of a beauty pageant. A stripped back offering with vocal and piano giving it a more absorbing mood of bitterness and sadness. There`s a more electronic offering with `Getting Myself Into` which has a synth or drum machine pulse like heartbeat throughout. A curious but quite compelling piece.

`Magic Bus` is wonderfully danceable, not Hi NRG but it certainly has a pacey beat heading towards EBM. A packed darkened room, dry ice and a glitterball and take it away. We have a dreamier eclectic piece with `Isabella` that retains a little edge or danger but also feels quite vast and open, oddly fascinating.

The album closes out with `XYST` and I thought what the hell is XYST only to find it was not only a valid scrabble word but also (in ancient Greek and Roman architecture) a covered portico, as a promenade and again (in an ancient Roman villa) a garden walk planted with trees. Make what you will of that but it`s an interesting composition that opens with remotely shared guitar chords and strolls along with vocals that are almost laconically shared with harmonic vocals joining in at times along this sauntering number. We enjoy some off kilter guitar tinges and riffs with a drum beat at the heart keeping a metronomic pace. This delightfully hypnotic number ends with seemingly a lions roar and some synth beats.

`All the Colours Of You` is a fairly apt title for this album which lyrically addresses topics from politics and race relations to climate change and the Covid crisis. It may be that the recent pandemic has stimulated some reflection as to the band`s own mortality and piqued some self-reflection. It`s quite diverse musically as well with anthemic numbers, electronica, dance to more introspective and reflective musings.

I must admit it`s some time since I touched base with James, but this album has really revived my interest and I’ll be investigating the albums, i`ve possibly neglected.

As the age old idiom relates “cream rises to the top” and if ever the view was that this band were less relevant these days, this album will reverse that impression.