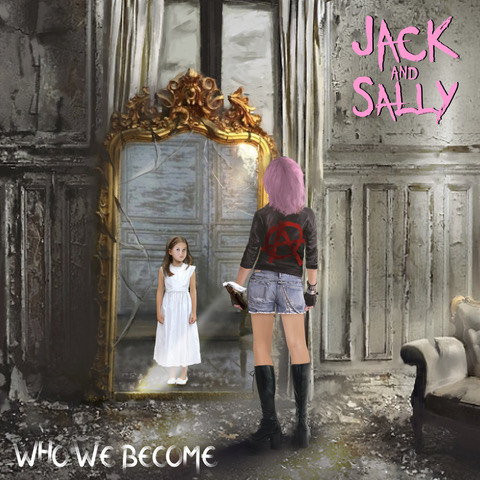 Jack And Sally are from London.

It’s worth starting with that because – lets make no bones about it, it doesn’t half sound like the latest US sensations.

To be totally honest, I have had “Who We Become” for a while, and it is only recently that I returned to it and realised its myriad charms.

The catalyst for the change? Well, Jimmy Eat World to be truthful. I reviewed their new one not long ago and call it happenstance or something, but “Superstar” – the lead track of these five played a day or two after.

Then I got it. It has the same clever, muscular, gritty blue collar thing that Jim Adkins and the chaps have too.

There’s something a little cinematic and disturbing about the lyrics of Ben Felix that sets this apart too. Love? Well yeah, but of the weirdest kind, as the protagonist is desperate not to lose his girlfriend.

All that is swept aside by one thing, though, and that is the very second that the solo kicks in. Because Joshua Jacobs’ guitar work has some real bollocks, proper going for it.

The punky “Nevernia” has something of Gaslight Anthem’s early work about it, especially if you can imagine them jamming with Pkewx3 for grins. This is melody, alt rock, cleverer people than me call it, but I dunno. It chugs, and it does things the way it wants to.

Because there are aren’t many pop punk bands that do things with the dirty swagger of “Tomorrow’s Revolution”. I am back to the Jimmy Eat World comparison for this one too, because it has a real clenched fist. A true highlight, it coarses with an anger at the world, and the lyrics, in all seriousness, if not the music, have a Levellers thing going on.

“Long Way Home” is one from a different part of the toolbox. Slower, a little singer/songwriter, a bit of Stereophonics’ arena vision, and one for which “Macy”, the closing song, is a perfect companion.

Also a mark of the “cleverness” of the record, if you like, because it very much continues the story of the opening song here.

That is a neat metaphor for the whole album, actually because it feels like Jack And Sally are very much at the start of their journey. These five tracks benefit from repeated listening too, as they reveal more each time.

“Who We Become” is a marker of intent from a band who may well become anything they choose in time.