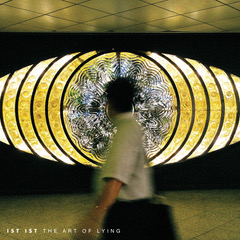 Manchester post/punk quartet, IST IST, Adam Houghton (vocals, guitar), Mat Peters (guitar, synth), Andy Keating (bass) and Joel Kay (drums) return with their second album `The Art of Lying` which relates to power-struggles and subterfuge, utopian ideals and dystopian regimes, tales of crumbling societies and corrupt governments, of truth and lies, love and death, oppression, and resistance. The album was written and recorded in isolation during the lockdowns of last year.

This release opens with `Listening Through The Walls` and it`s a delightful slow burn with a dreamy quite mesmerising underlying synth swath and constant electronic drum beat which really allows a base for singer Adam to share his wonderfully rich baritone vocal. A blistering guitar riff and intricate drum beat and bassline lead us into `Fat Cats Drown In Milk` which has a slight feel of something that maybe Andrew Eldritch may have released if he hitched up with Mansfield`s new wavers B-Movie. I read somewhere that some of its inspiration came from the unsolved Hinterkaifeck murders in 1920’s Germany. There is a tangible sense of hurt and pain that runs throughout.

`Middle Distance` is a fairly observational, nigh on introspective reflection and reaffirmation of still needing that special someone in your life. It`s very dreamlike with some pleasant harmonies and becomes quite spellbinding. There`s a much faster pace to `Watching You Watching Me` which has a slight edge to it. I loved the almost reverberating bass line which really shone brightly in the latter part of this captivating number.

`The Waves` kind of evolves from an initial heartbeat, synth swathes and a spoken word narrative before it bursts into life. It has references to the use of antidepressant medication and how that can affect the participant. There`s an almost goth like vibe to `Extreme Greed` which has that distant, remote nearly isolated texture about it.

`It Stops Where It Starts` has a quite dystopian feel but that just may be my interpretation. It moves along at pace and becomes quite hypnotic as it progresses but retains that slight edgy sensibility. We have a more socialist come anti-capitalist sentiment shared through `If It Tastes Like Wine` which is a delightfully hesitant rock out.

`Heads On Spikes` according to the band explores the dynamic of a Fred and Rose West-like couple consumed by the ugliest of secrets. It seems quite detached at times but explodes into life as it continues creating that perception of unspoken fear. We close out with `Don`t Go Gentle` which is about saving a young woman from suicide and references Dylan Thomas`s metaphorical poem on death `Do not go gentle into that good night`. The serene delivery of the lyrics against the quietly calming musical accompaniment allows this alluring composition to become almost soporific.

` The Art Of Lying` is a really captivating submission and is the kind of album that unfolds, develops, and evokes something fresh the more you listen to it, almost akin to a flower it seems to grow and flourish from ideas that have been germinated from a seed. There`s certainly no second album syndrome here.