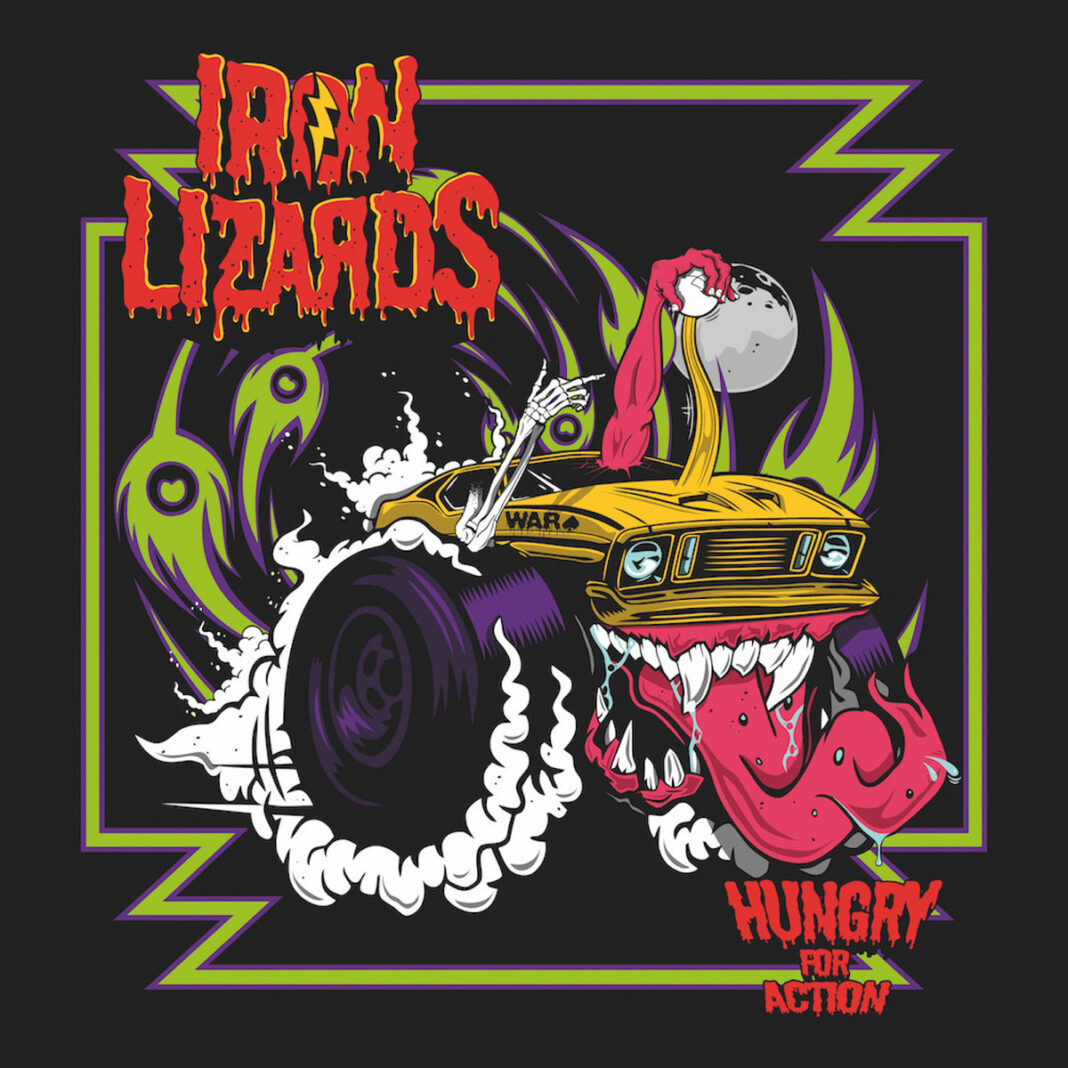 Iron Lizards deserve a telling off, frankly. They have missed a trick.

The last song on this, their debut full length, is called “Iron Lizards” but the album? Well the fact that it’s got a name has robbed us of one of the great joys.  Iron Maiden did it. Track, band and album all called the same thing. All I am saying is this: if its good enough for Maiden….

Other than sticking them in detention for that misdemeanour there’s nothing about IL that doesn’t rule all, frankly. Nothing.

Whether you enjoy it as much as me (and pretty much I am besotted with this 27 and a half minutes)  will depend, basically, on one thing: does your heart race when you see these words: “These are other kids, this is just an accident, just a couple of wild punks out rasin’ hell”.

If you know your Hellacopters from your Backyard Babies, then you know that that is the opening bit on “(Gotta Get Some Action) Now!” The greatest opening song ever made (no arguments) from “Supershitty To The Max!”, the debut album of the (what was then) side project of Entombed’s drummer (seems mad to say that now) given that what Nicke Andersson and the lads did on that redefined a genre (and one of these days I’ll work out what on earth Action Rock (as we now have to call it) is.

There’s a moment – probably about 12 seconds in to “It’s About Time” – where the fuzzy lead breaks out and something in between Zeke and The Hip Priests happens – and you are transported back to the days at the turn of the century where the postman used to bring extremely expensive vinyl to your house on a daily basis. Records you found on import, tape traded and had to have.

Maybe this trio were in the same clubs, because I am telling you we’re brothers in arms here. Getting bludgeoned by something that’s so fuzzy and fast that Lemmy would approve sound like your bag? Get on “The Way You Play The Game” then, and you’ve got a new favourite band.

“Rip It Up” would be good enough to get Beavis And Butthead ready to break stuff, and “No Escape” is aptly named, seeing as Usain Bolt even, couldn’t outrun this thing.

In truth, talking about individual tracks is a fools game. Not just because, by and large they all sound the same, but rather this is about a feeling, about a rush. A knife fight at the Hells Angels get together should be soundtracked by “Obey/Annihilate” and if “Deathride” has a groove and a bit more of a garage vibe, then its still the sort of garage where they’re fencing stolen cars.

“Confusion Blues” does its thing and sounds filthy, even though I couldn’t tell you a word.  If there’s an air of the end of the world about the whole thing, then “No Motivation” still sounds like it should have women wrestling in mud for a video, and “Monster Hero” casts them in the same kind of ballpark as the glorious Mammoth Mammoth.

“Ex” (I don’t think I want to know what she dumped them for) gets the breeze block out to bludgeon you once more and “I’ll Be Around” sounds like a threat. If they moved into your street, then I suggest keeping the doors locked.

What I’ll say is this: Elio – Guitar and Vocals, Kevin – Drums, Valentin – Bass guitar are, on the strength of these 12 songs, already the finest band to ever come out of France – don’t give me your Gojira nonsense, one day they’ll write something that isn’t deathly dull. By which time, Iron Lizards will have passed them on the motorway, flicked them the V’s and robbed their houses for kicks. “Hungry For Action” is as good as it gets.