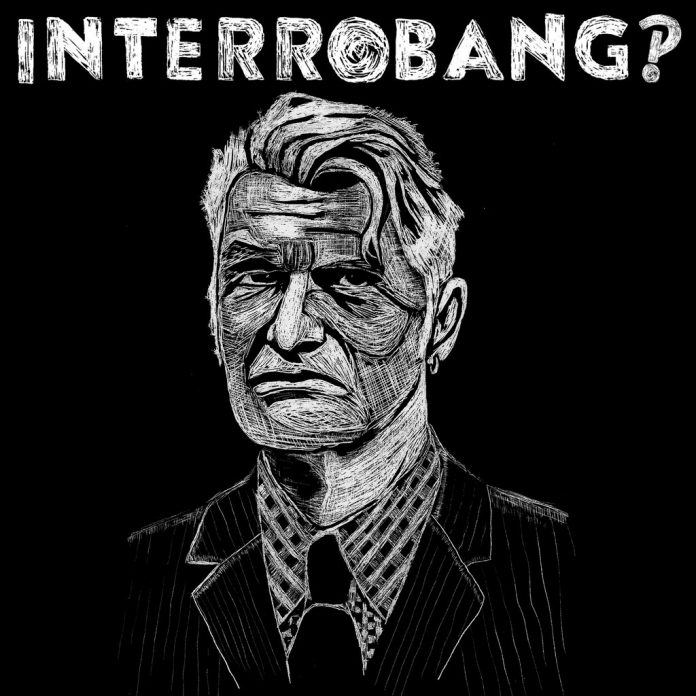 I`ve said this before and i`ll keep repeating it. What I love about contributing to this wonderful website is when you get an invitation, from the Editor, with a cryptic line such as “You might like this one” So it was with some excitement, I came across this release from Interrobang?!, the band formed in 2012 by ex-Chumbawamba singer Dunstan Bruce and drummer Harry Hamer, together with Stephen Griffin, former guitarist of Regular Fries. Interrobang?! finds these fellas getting back to their anarchist, post-punk roots, now a little older, but dealing with middle age, still cheesed off and with many things to say, maybe more than ever, and looking for new ways to channel it.

What the hell is an interrobang? Well it`s known as the interabang (often represented by ?! or !?), is a nonstandard punctuation mark used in various written languages and intended to combine the functions of the question mark and the exclamation mark or exclamation point, known in the jargon of printers as and programmers as a “bang.” The glyph is a superimposition of these two marks.

This probably goes some way to explaining the moniker or maybe not, who cares with these boys it`s all about the music and lyrical content. I have to say I never saw Regular Fries but saw Chumbawamba many times after being introduced to them by my Polish friend Jacek and taking him to see them live co-touring with Wednesbury`s finest Credit to the Nation at the Kidderminster Market Tavern in September 1993 on the “Enough is Enough” tour. This was a few years before their massive hit. It was a rude awakening as I knew little about them but was won over by their political outpourings, shared over some superbly danceable tunes. I was gobsmacked.

“Here Now” opens the album and it`s not just a gentle opener to ease you in but a real statement of intent, where the band are saying we are here and we`re still relevant, shared against a brittle and catchy musical backdrop with some sharp backing vocals. A real cri de Coeur! or cry from the heart, I loved the line `I`m back in the fray. I`ve still got something to say. I don`t wanna fade away. And I’m here now. Right here. Now it`s not fuck my life; it`s fuck! My Life! …. Terrific.

A short offering comes next in the form of “The Inclement Weather” which despite it`s title manages to get in a mention of the gunpowder plot but it`s really a reflection on the injustice of life, what maybe the narrator should have had but then realising what they do have and refocusing and embracing what adventures are to come. All played out to to a frantic backdrop shared at a hundred miles an hour. I`d assumed that “Asking For A Friend` would have been about some childhood dance where you fancied somebody, and a mate took it upon themselves to try and matchmake for you but don`t ever assume anything. A cracking drumbeat and strummed guitar chords introduces this piece about internet searches for certain maladies or disorders that occur in people of a certain age, This track really gelled with me and I spent the rest of the day humming the line `asking for a friend` and wondering where the hell I’d heard this line.

“Are You Ready People?” musically is really stop start with some cracking jangly guitar riffs, a slow-paced start and then a short speeded up interlude and then back to a more leisurely stroll building a platform, for personal offerings about retaining the desire to share verbally and musically the injustices that life throws at the ordinary working man. A bouncy and at times quite distant backing supports the track “Mad As Hell” which is a rant about well, being annoyed, not caring what people think and still trying to edify or share thoughts and observations about inequalities of life. Maybe it`s an age thing but I could really relate to “Curmudgeon”, a bad-tempered, difficult, cantankerous person. The words were shared over a tune not unlike a slowed down version of Blur`s Parklife. Maybe it`ll become an anthem of a generation of middle aged killjoys, who knows?!! “Music Of The Gross” part expressed through a loudhailer, a song that is almost a challenge to the stifled attitude to music these days, the bland songs that are encouraged by the record companies and media. This is almost a protest that stating that they will continue to play and sing their brand of music as the underground Czech rock band The Plastic People Of The Universe did during the communist repression of the late sixties and early seventies. Not so much being activists but only wanting to be able to express their music. The catchy tune helps to get the point across as well.

A song about somebody who is silent, aloof even reserved is shared with the catchy “Taciturn” and the line “Sometimes silence says more than words” expresses the truth in so many ways.

The album is written from a more personal perspective than a political one, with observations and life experiences and this is never more present than in “Do You Remember?” a deep and very moving reflection on the writer`s difficult relationship with his late father. In a similar vein “Love It All” although dealing with the death of a neighbour, this catchy song is quite heartening and inspiring, with the strap line of `love it all` again getting under your skin and surfacing for hours after hearing it.
I suppose when you reach a certain age in life, your mortality is ever present in your thoughts and here the narrator shares his with the quirky “Based On A True Story” Their eulogy being constructed in their mind and how it will affect those left behind. “Billingham” is a sort of love song or love hate song, gifted in a very rock n roll danceable tune. An ode to the place where the writer was born and grew up and his relationship with the place and how it shaped him.

The last two tracks “Breathe” and “Am I Invisible Yet?” are again life reflections and the former is a nervous musing as to whether when they reach sixty will they still be irritated enough to rail against life`s discriminations or just let them pass them by. The latter about moving into inconsequence, where once they were very relevant, had something to say and were listened to.

I have to say I really enjoyed this offering, admittedly I’m in the same age bracket as the writer so can empathise with a lot of the outpourings but there is a real edge to not only these musings but the music that accompanies them. If you like lyrics that make you think and enjoy music in a similar vein such as Gang of Four, Wire, the Fall, Blue Aeroplanes, Au Pairs that sort of thing, this will be your cup of tea. The songs contain some caustic, cum acerbic wit but with have you singing along and I guarantee a couple will get into your subconscious in a nice way.