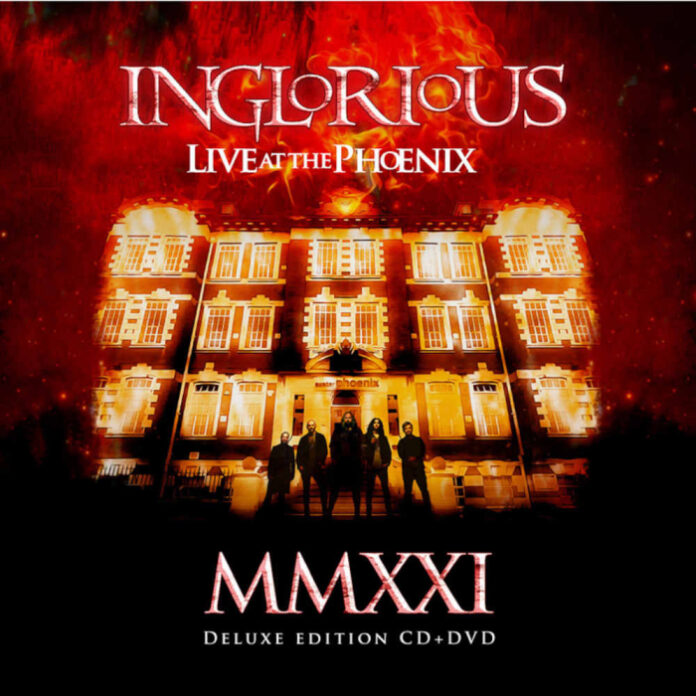 I know in the great scheme of things, what with war, the cost of living crisis, people being unable to heat their homes and eat at the same time, it might not be a huge issue, but……

I was watching Inglorious last week (and Nathan James was probably screaming at us to “make some fucking noise”, he does this a lot) when the Inglorious main man said something that led MV to go “did they…..?!”

“We might not have been able to play live,” said the man with a voice that was born to sing hard rock, “but we released three albums in the lockdown.” Now, I’d reviewed two: the thunderous “We Will Ride” and the jolly good fun of “Heroine” (wherein they’d covered a load of songs by female bands) but this third one…..

So anyway it turned out that back in April I was sent this and equally it turns out that – pretty much like all Inglorious stuff – its brilliant.

“MMXXI – Live At The Phoenix” saw them group in Exeter for a show on their last tour – and crucially their first tour in ages – and you can, if you close your eyes, almost sense the joy on the stage that night.

It is, essentially the show they played last week too, so in a sense it’s like reading a book after seeing a film, but my goodness this is a band that was on top of its game that night.

“She Won’t Let You Go” starts with a crescendo and gets cracking from there (and sees James scream “make some noise!” even before he’s sung a note, which did make me smile). What does strike you and was just as prevalent the other night too, is that Inglorious are a quite different group since the band was jettisoned in 2018. Songs like “Messiah” are palpably less bluesy than their earlier stuff, darker, heavier and I daresay closer to what the band actually likes. That’s reflected in the way they play “Breakaway” and the other old stuff that peppers the set. A Glenn Hughes-esque rocker now, it has a new life here, which is also true of “Read All About It”, from the second record.

One of the covers album is played, “Barracuda” by Heart is a song so good you’d have to have a confidence to try it, never mind pull it off, but the best of this brave new world, if we can put it like that, is “He Will Provide”. The religious, almost apocalyptic flavour of the words isn’t my usual thing, but the way the twin guitarists of Danny Dela Cruz and Dan Stevens combine is almost Dream Theater in its construction.

At the end of this, there’s like a new and old sandwich. “I Don’t Need Your Loving” stomps about like Thunder, still, and “Until I Die” shows they’ve always had a skill to go with the class.

But in the middle of those two is the new album’s title track and it belongs in the same top drawer, but it’s a cracker. What hasn’t, perhaps quite happened is that their audience has remained as big to go with the slightly expanded sound. They deserve as big a crowd as back in 2016 when they were the arena rockers in waiting – and as “MMXXI – Live At The Phoenix” proves, we probably all need to make some noise about how good Inglorious are to remind everyone else still.