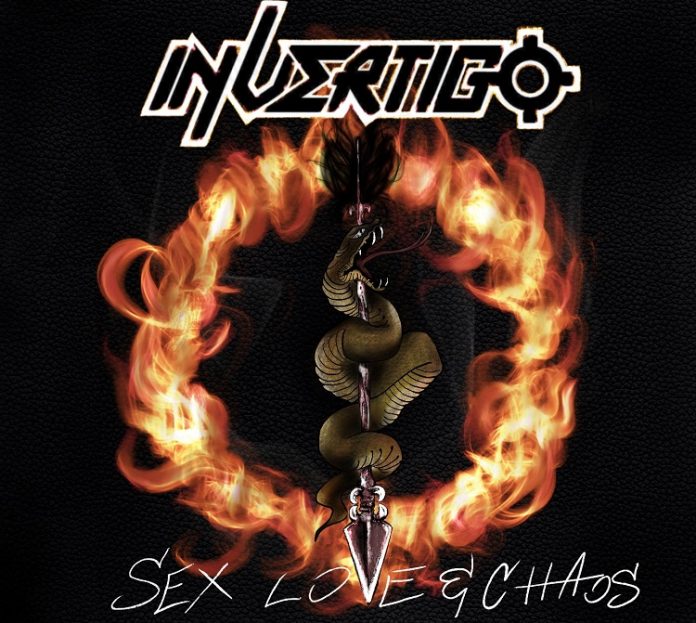 You know that old saying: “man is known by the company he keeps” (I think it was Aesop who said it first)? Well here’s the musical equivalent: “bands can be judged by the supports they get.”

Take In/Vertigo. They’ve come out of Calgary, Canada and they’ve opened for the likes of Diamond Head, Pop Evil, The Wild! and The Lazy’s.

That told me this: here’s a band that is rooted in the classics (Diamond Head), but modern thinking (The Wild!) and with a whole heap of rock n roll (The Lazy’s) and eyes on arenas (Pop Evil). And for once I was right.

Then there’s the album title. Sex comes before love (and yeah, puns are intended, shoot me) and if that doesn’t tell you what you need to know then I don’t know what does. “Chains” sounds sleazy. If this was LA in the 80s it’s the Cathouse and GnR rather than the Rainbow and Poison. Sleazy in a way that wants to fight you once its done whatever it wants to your date.

But, don’t make the mistake of thinking you got this pegged, because you haven’t. The other three songs are all distinct. Each self-contained, if you will. “Bad Enemy” for example, doesn’t half remind of Audioslave because the riffs are huge and Reed Alton roars the vocals, he really does.

That must be the pattern set, right? Nope. “The Night” is funky blues, not too dissimilar from Dan Reed Network, say and there’s a real classic feel to “Take It”, on which some sort of inner Robert Plant is found, or Jack Russell from Great White, take your pick to be fair.

So polished does “Love Sex And Chaos” sound and so good is it, that you do have to remind yourself at times that it is a debut. That said, they’ve been together ages, played all those gigs and the band  – in particular guitarist Shaddy Elsaghir, bassist Duncan McCartney – are veterans of the scene.

It might be only four songs and you don’t want to go too overboard either, but at the same time, modern hard rock doesn’t get much better. In/Vertigo could get to dizzy heights, that’s for sure.