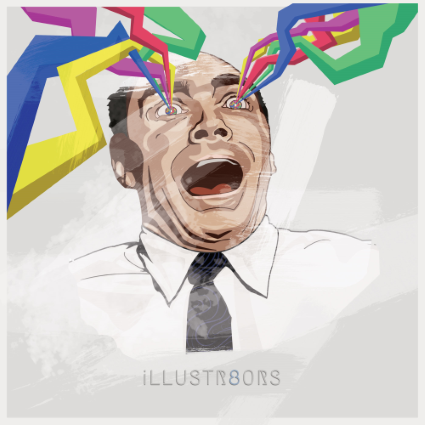 What’s in a name?

Once upon a time there was a band called Blackwolf. They ruled. Back in 2014 on the albums of the year round-up, yours truly wrote: “This, their debut full length record saw them deliver on the potential I thought they had. Choc full of swagger, hooks and attitude, Blackwolf will either be massive or give 100% trying to be.” And proclaimed it be the twelfth best LP of the annum.

Last year they stuck out a single, but things were rather quiet. It was still something of a surprise though, when we received a press release saying they had rebooted as Illustr8ors. Two things went through MV’s mind at the time. First: “Christ, what an awful name” (sorry, but using numbers in words is a pet errmmm, h8 of mine). But second, and rather more important was “yay!”

The reason for that reaction is quite simple. There was enough in that record to believe that Blackwolf were the best of the Brit up and comers back then, and crikey, there’s enough reason to think that Illustr8ors can still make it to the very, very top.

They’ve chosen to make that return with this bright and breezy four tracker. Clocking in at just over a quarter of an hour long, it showcases everything you knew was ace about Blckwolf and hints at just a couple of pointers to the future.

Seemingly working on the maxim that it wasn’t broke before so dammit what needs fixing? Things kick off with “Your Animal” which is essentially just trademark Ilustat8ors. Hard rock swagger, soaring chorus, singer Scott being brilliant – we knew all this.

What “…..Animal” and a couple of others – “Swimming With Anchors” and the wonderful closing affair “Shush Shush” notably do, is to also take things just a little way down a Led Zep type avenue, just a hint maybe – a little flourish here and there  perhaps – but its definitely there and its definitely welcome.

The remaining song “Something Biblical” is a heads-down rocker and is a timely reminder of why we loved their previous incarnation so much, and if this is the starter, then hurry up and give us the full buffet.

Still ace, and this just illustrates the fact.

The EP is out on 14th October