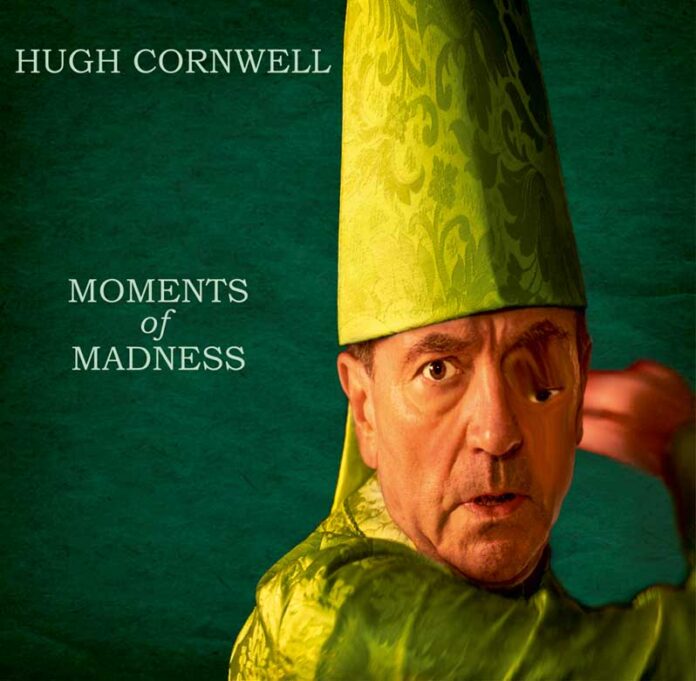 Never assume knowledge. They teach you that when you do a journalism degree. So you’re supposed to explain who Hugh Cornwell is and why his tenth studio record is so important. Not sure about you, but I think we’ll skip that bit.

What I will say though, is that there is a close cousin to the first statement, it’s something I’ve always believed. Never pretend you know something you don’t. Every artist I review on these pages is someone’s favourite. And If I start blagging, everyone will spot it.

So: I am a relatively recent convert to his former band, seeing them for the first time this year, and when I saw Cornwell open for The Undertones in the summer, it was the first time I’d seen him too. He – and the band he had – were superb that night, and so is this.

There’s a sentence in the supporting press documentation that came with this, though, that rather intrigues. It says that Cornwell was “widely regarded as the poet laureate of the punk era” and certainly, the ten songs here are wonderful in their use of language that verges on the unique, but it’s only when you add it together with the truly bewildering kaleidoscope of musical styles that you realise how good “Moments Of Madness” is.

There’s a bit of a garage rock thing going on, with “Out Of The Wilderness”, its typical of the half spoken delivery as Cornwell channels some sort of Lou Reed vibe. “Coming out of the wilderness, I need a damn good shave” he reasons, and the guitar solo is superb.

That one is one of the longest on the album. The rest are presented without excess. “Red Rose” is a celebration of jewellery. He’s not impressed with tattoos, mind you. “Then you get the tramp stamp, I don’t like the tramp stamp” is not a chorus I thought I’d review, but whatever. For reference, these are also known as “slag tag’s” if you want to get that in a future record. Glad to help.

This is a truly gifted and understated record. “Iwannahideinsideaya” appears to have been in stream of consciousness, but it works magnificently. There’s something unsettling lurking on “Looking For You”, with its bass and discordance, and “When I Was A Young Man” appropriately goes back more to the sound of his youth, but there’s some dark themes here. “Father, I forgive you for regretting that we met……” sticks out like a sore thumb. Especially as the music is so joyous.

As if to prove the record is a proper melting pot where anything goes, then the title song has a reggae feel, while “Beware Of The Doll” seems to come in from the prairies on widescreen. It feels like “Too Much Trash” is one of the more important ones on the album. Taking on environmental issues, but also our own laziness, it’s a shining example of what this record does.

“Lasagna” is equal parts Graham Parker and The Stones’ “Not Fade Away” and is a moment of light and fun on a record that isn’t exactly full of either. More typical is the heavy, claustrophobic air that swirls around on “Heartbreak At Seven”. But my goodness it is done well.

It’s been four years since “Monster” – his last solo record – and it’s not been a lot of laughs, after all. “Moments Of Madness” is perhaps a product of that, but as a chronicle of the human existence in 2022, it is a mighty one from an artist that is brimming with ideas and a band with the skill to pull them off.