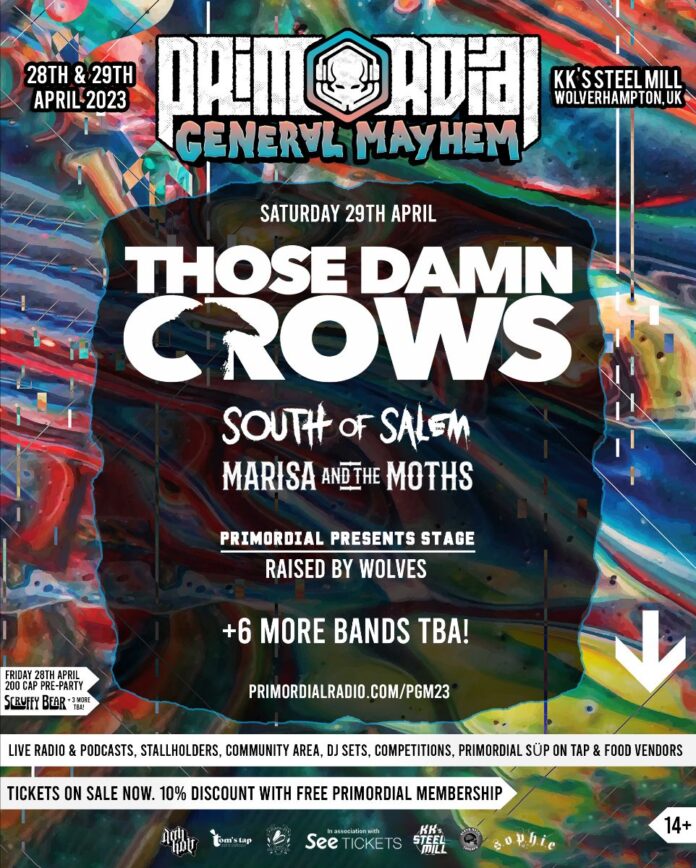 Primordial Radio is hugely excited to announce the details and first bands for the Primordial General Mayhem 2023 with modern rock’s unstoppable force Those Damn Crows confirmed as the main event headliners on Saturday 29th April 2023.

Starting in 2018 as a one-day event with just three bands, the Primordial General Mayhem has become the destination event for Primordial Members and rock & metal fans alike.

Combining the power of music and community, the event has previously hosted the likes of Skindred, Devin Townsend, Bob Vylan, Massive Wagons and many more over the past four years with Knotfest describing it as a “Grand Spectacle of Rock Fury”.

Now with a new home, the Primordial General Mayhem will be taking place at the illustrious KK’s Steel Mill in Wolverhampton on Saturday 29th April 2023, with an additional intimate 200 cap pre-party also planned for Friday 28th April 2023.

Modern Rock’s unstoppable force Those Damn Crows have been confirmed as headliners for Saturday 29th April 2023.

In between performing on the main stage at Download Festival 2022, selling out headline shows at the likes of Cardiff Castle, and playing German TV channel WDR’s prestigious Rockpalast Crossroads festival, Those Damn Crows recorded Inhale/Exhale, an album that elevates their signature hard-hitting rock to dizzying heights.

The Welsh quintet sadly had to pull out of headlining PGM 22 earlier this year due to vocalist Shane Greenhall injuring his back. This is very much unfinished business, and the Primordial team can’t wait for the guys to finally take to the stage and deliver a humungous headline set.

Confirmed for the main stage on Saturday 29th April 2023 are hard rockers South Of Salem who return after an incredible PGM set in 2021. One of the hottest unsigned rock acts in the UK right now, Marisa & The Moths will also be appearing – their debut self-titled LP hit #66 in the Official Downloads Chart and has amassed hundreds of thousands of streams globally.

Performing on the Primordial Presents Stage on Saturday 29th April 2023 are nu-grunge outfit Raised By Wolves, who recently topped the Primordial Up-Vote Chart getting to No.1 with their single “Ringing”. There are also six more bands still to be announced for the Saturday Main Event.

Appearing on the Friday night 200 cap pre-party will be headliners Scruffy Bear, who stepped in last minute at the PGM in 2022 for a momentous and memorable set, and they’ll be joined on the night by three more bands to be announced.

Speaking about the Primordial General Mayhem 2023, Music Director Pete Bailey states: We looked at many different options for a new PGM home but couldn’t be happier to be working with KK’s Steel Mill. They have built a tremendous reputation in a very short space of time, with many of our members feeding back about how good the venue is.

“We also couldn’t be happier to have Those Damn Crows booked to headline, we were naturally gutted when they had to pull out for 2022, but what a moment it will be when they finally take to the stage in 2023 alongside such an incredible bill that truly showcases the incredible quality of new bands we have in the UK with more still to come!
See you in April \ .. /”

Tickets are on sale now at – https://primordialradio.com/pgm23

Grab a 30-day free Primordial Membership to get 10% off.
You need to be signed in order to access the discounted tickets on the page.Primordial Radio online