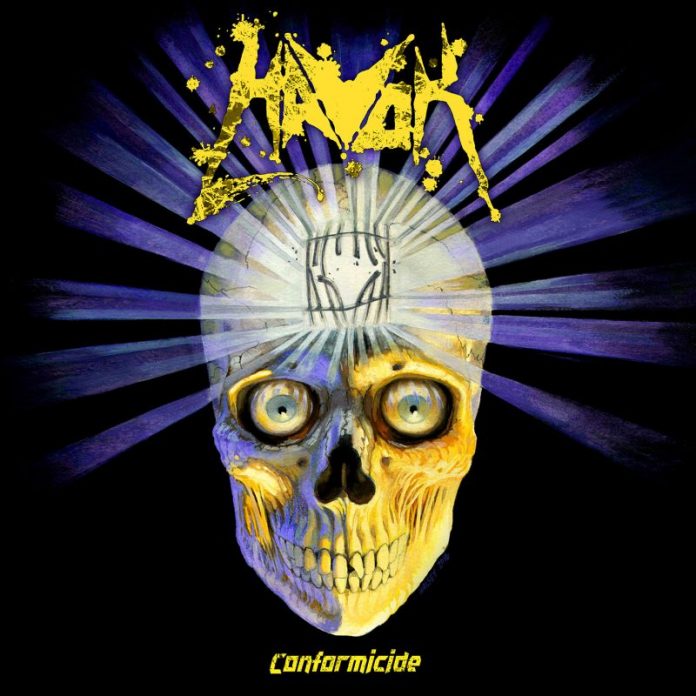 Conventional wisdom is that in these postmodern times where everything is fragmented, we are supposed to be so desensitised by the media that we don’t feel anything, instead we are merrily strolling into some consumer led, capitalist heaven or, even worse, some right-wing Trump and Brexit led hell. It is great then, that music can still reflect its surroundings and document it’s times.

Four years has passed between Havok’s last LP and this one. In that time, to be fair the world has gone to hell in a handbasket. “Conformicide” spares no targets, whether they be on the left or right, in its shooting at targets wherever it chooses. Rather it spits with anger and indignant rage across a range of debates.

The first four songs are basically the record in microcosm. Opener “F.P.C” administers a kicking to political correctness (and yeah the “F” stands for what you think it does) “Hang ‘Em High” gives one to big business and politicians  (key line: “the enemy is not coming from overseas”).

Not that Havok are anywhere near done.”Dogmaniacal” is a quite brilliant – and brutal – condemnation of religion which dismisses God as “a power tripping maniac”, while “Intention To Deceive” is perhaps the crowning jewel in what is a stunning thrash metal album and features a narration which is a perfect summation of the dumbing down of the public. “It’s five o’clock,” it says, and here’s what we want you to think.”

Now, its just possible that you’re reading this thinking, “yeah fair enough, but I just wanna headbang in a moshpit.” Well, to be clear you are absolutely in luck given that that Havok have thought of that too and the whole record is predicated on the idea that there is but one altar to worship on – that of the almighty riff.

Throughout the aforementioned quartet and the rest, the guitars come at you at some kind of speed closer to a whirlwind, the drums pound and the bass, well the bass is incredible. New four stringer Nick Schendzielos (Job For A Cowboy) makes his presence felt, its fair to say, while singer David Sanchez has a real menace in his vocals, sounding like some hybrid of Dave Mustaine and Tom Ayrya – but both at their angriest.

Scarcely a weak moment here, “Ingsoc” comes with rare venom, “Peace Is In Pieces” finds some tribal vibe, and “Claiming Certainty” is just a pure, traditional thrash masterclass – an epithet which you could reasonably apply to the rest in fairness.

“Masterplan” is perhaps something of a departure, boasting a real epic, grandiose feel as it goes about its work – and strangely has an almost stoner rock vibe in places. It can’t resist thrashing though, and Havok are extremely good at that, and by the time this all ends with “Circling The Drain” anyone who has ever had a love for thrash metal is almost compelled to agree.

To call “Conformicide” the best Havok album is a little disingenuous to the others as it almost seems as though the others weren’t great. They were, but this one is their finest work by quite some way and is the perfect thrash metal record for 2017.