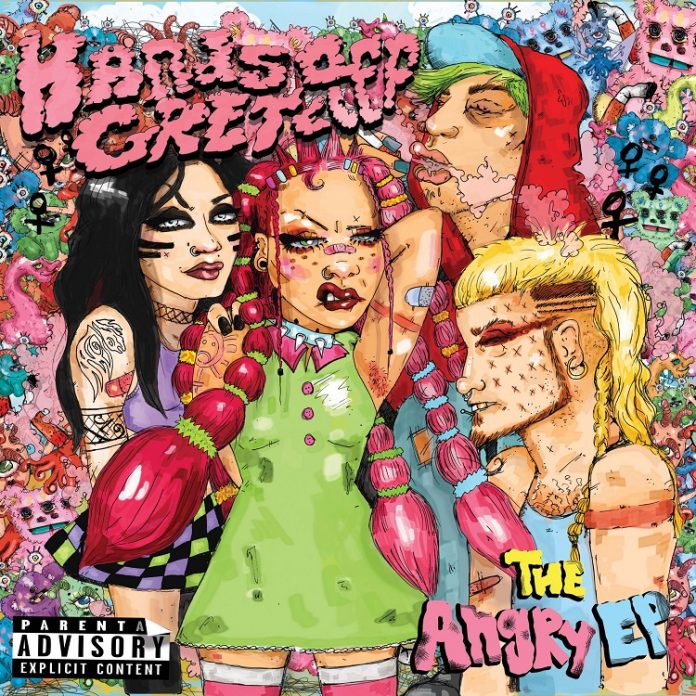 There are people who like to do research. My dad for example, has always lived by the mantra “time spent on reconnaissance  is seldom wasted”. Me? I’ve never made a note or done any research in my life.

As an example of my slack approach to, you know, knowing stuff, back in July last year my favourite band, The Wildhearts, played a gig in Coventry, and I turned up to worship (I’d like to say I “watch” but no, not Ginger and the boys) and until I got there I didn’t know the support band was Hands Off Gretel, I don’t have Facebook and I hadn’t looked.

I was glad they were. They’d been on the site a few times and they were one of the more interesting bands we’d had on.

When “The Angry EP” turned up the other week, I looked at my review of the gig – it was written straight after they’d finished, I like the immediacy of that – and amongst the words I’d used to describe the Barnsley based band were these:

All of which, I stand by nine months or so on.

Led by singer Lauren Tate – she’s their focal point live – this is the visceral side (she released a more soul-filled solo record last year) this is spits bile all over its targets with laser-like precision.

“She Thinks She’s Punk Rock” is typical of what they do. Nasty, and gnarly, yet somehow in amongst it there’s a chorus, a melody – and a slogan, there’s always a slogan with HoG.

But so versatile is Tate that she manages to sound vulnerable. “I’m not punk at all” she confesses at the end.

This is just nine minutes, but goodness me, what a ride it is. Sean McAvinue supplies a mighty riff to the unsettling “Don’t Touch” – “dress me up in pretty things” offers the first verse, in a manner that suggests you had best not ever intervene.

It finishes with “Bigger Than Me” which has a genuine sinister, menacing edge, and really the four piece, completed by bassist Becky Baldwin  and drummer Sam Hobbins are so varied that you have to marvel, and so empowering too. It is wonderful to see a driven, young band with such a vision.

But if this isn’t “punk at all” as Tate puts it, then what is it?  Depends how you describe punk I suppose and that’s the point. It doesn’t defining, because that would mean a pigeon hole and there isn’t one for this.

If you believe like me, that Beavis and Butthead were the greatest reviewers ever, and that actually music is only about the feeling, the initial rush, or as they would have had it, things were “cool” or “sucked”, then this most definitely is the former – and honestly, that’s all that ever matters. The rest is just a waste of time.