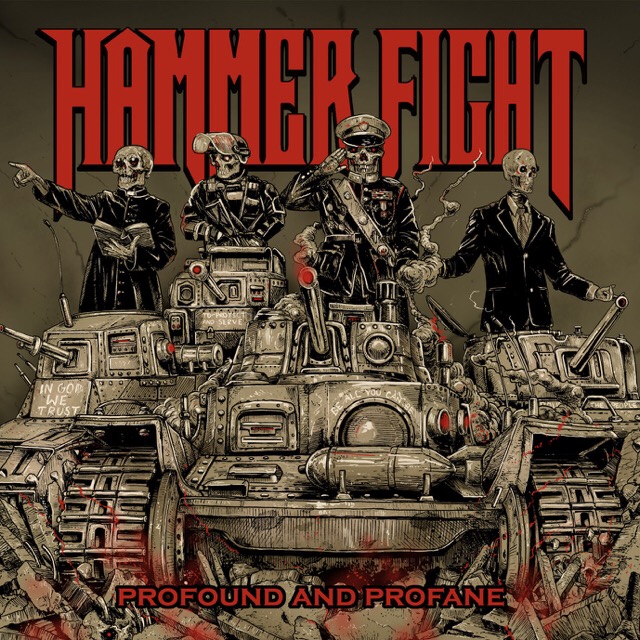 New Jersey band woke up this morning…..with a hangover

Let’s be honest, with a name like Hammer Fight, these reprobates from New Jersey were never going to be writing hippy dippy songs about fluffy bunnies and lacing daisies into your loved ones hair.

Indeed, their own record company recognises this, describing the four piece as “bunch whiskey-drinkin’, beer guzzlin’ bros” and if that sounds like they are a bunch of frat boys running amok, then it does them a disservice, because what Hammer Fight are is just about the tightest, meanest and most downright aggressive groovers that you could wish to find.

By their own admission the band are: “Versatile enough to share the stage with the most extreme death metal acts to classic hard rock bands and everything in between,” and if that all smacks of a lack of focus, then it’s also true. Even the bands they claim to be influenced by on their Facebook range from Slayer to Motörhead to 3 Inches Of Blood, but crucially the gods of meaty punk Zeke get a mention, and there are frequent moments on “Profound And Profane” that lead the mind to wander to the thought of just what depravity occurs at a party round their house.

By and large songs – from opener “Picking Up Change” to the closing “Cult Of Conceit” content themselves with a) being mighty and b) charging around at a 100mph just for kicks. But here’s the nub of the matter: Hammer Fight are bloody good at it.

On “Target Acquired” for example, which by the way comes on like underground heroes Bible Of The Devil in a particularly bad mood, singer Drew Murphy begins with the though of “Oh Shit I Feel It Again!” and is soon joined by a formidable rumble, while on “Private Stock” there’s a thrash metal gone hardcore feel, and “Ultimate Sacrifice” boasts a riff from superb Todd Stern and Dan Higgins that is designed to move mountains.

The suggestion that whatever else they might be doing, these boys are absolutely not messing about, is never far away and when they absolutely nail it, as on the stunning “Good Times In Dark Ages” they are pretty much unstoppable, and you can pay “Gods Of Rock n Roll” no higher a compliment than to say Lemmy would approve.

And if most of the record is almost unrelenting in its desire to inflict some form of injury, then “Low And Broken” offers some lighter relief as they come down with an acoustic boogie topped off with some Thin Lizzy-esque twin lead – even if Murphy still sounds like he’s gargling with razorblades.

This is their major label debut and Hammer Fight deserve credit for absolutely not compromising and watering anything down. It sounds as though the band had tremendous fun – and most probably a few drinks – making it, and it also sounds like they would be a brilliant live band.

“Profound And Profane” is a fine attempt at capturing that energy the studio and the band is well named.