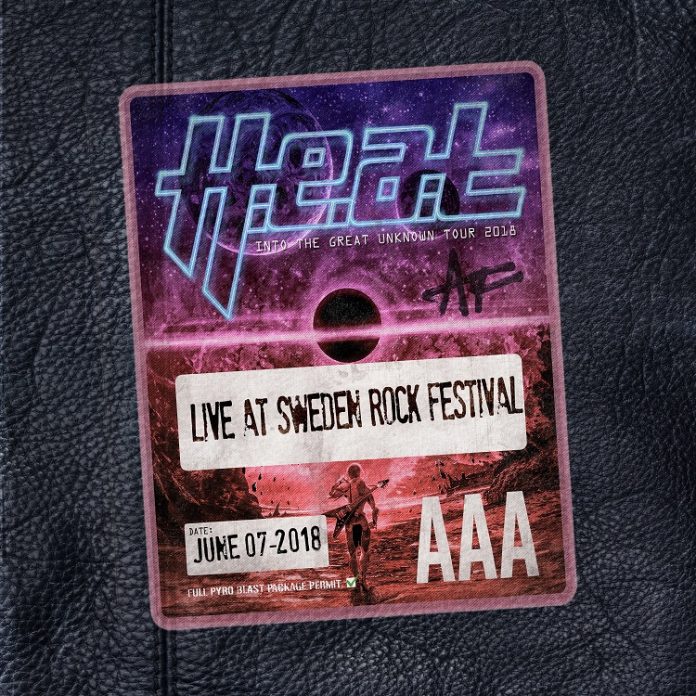 Earlier in the year, I finally got to see H.E.A.T live.

Actually, “finally” might be the wrong word, because for all that I’d read about them, the first time I really came across them was with 2017’s “Into The Great Unknown” album.

Why that was, I couldn’t tell you, especially given the music I grew up with (when I did see them it was supporting Skid Row, which may give a clue) but still, it doesn’t matter how late you are to the party as long as you show up in the end, right?

Anyway, about a year after “….Unknown” came out, the band appeared at Sweden Rock Festival in their homeland, and what happened in the hour they were onstage is documented here.

Which kinda presents a problem, because as I wrote that night: “It has to be said, if awards were given out for energy, then H.E.A.T’s Erik Grönwall would be the gold medallist, the Oscar winner and just about any epithet you want to give him” and although you can imagine it while listening to the CD (or watch it if you’ve got the DVD) it isn’t the same.

But then, I guess all live albums suffer from that too, and one thing you can’t escape is how mighty – and how big – H.E.A.T sound. “Bastard Of Society” from the latest album is a brilliant opener, “Mannequin Show” from the one before it sounds like something Europe would have done if they fancied being really bombastic, “Redefined” doesn’t even realise the 80s have ended, and that is just fine with everyone here.

Largely, the band walk the line between hard rock and power metal as well as anyone does. “Shit City” has a chorus that is simply made for thousands of fists to pump in unison, “Beg Beg Beg” does sleaze, and Grönwall screams something in his native tongue before it starts, that although I don’t speak Swedish sounds kinda nefarious. It also gets bonus points for doing the middle bit of “Whole Lotta Rosie” and segueing into “Another Piece Of My Heart” without either sounding remotely forced.

All hard rockers need a power ballad. These boys have one. It’s called “Tearing Down The Walls” and I’ll bet you any money you like there’s phone torches all over the place as it plays. Not being a romantic sort I’ll be honest and say the filthy grooves of “Emergency” do more for me and not just because I have a grudging kind of respect for the opening line: “I think I’ll have myself a heart attack, if that’s the only way to bring you back…..” which seems a touch extreme to me, but whatever I might give it a go at some point.

“Inferno” is hot as all hell and whips up a moshpit at a guess, and the closing “A Shot At Redemption” opens with some brilliant slide guitar from Dave Dalone, but even better an exultant “one for the money, to for the show, three to get ready and go Sweden Rock, go!” from a frontman you can’t fail to warm to.

He says himself: “For our entire career people have been going on about us making a ’DVD/Blu-ray’ and we can finally reveal that we will be releasing ’Live At Sweden Rock Festival’. For those of you who have yet to see us live, this is as close as it gets.  So go out and roll around in the garden, get an uneven tan, have 1-20 beers and kick back in your couch for the ultimate festival experience. Happy watching!”

There’s no point in analysing this much more than that. This is fun. And it’s H.E.A.T live, I can tell you that much.