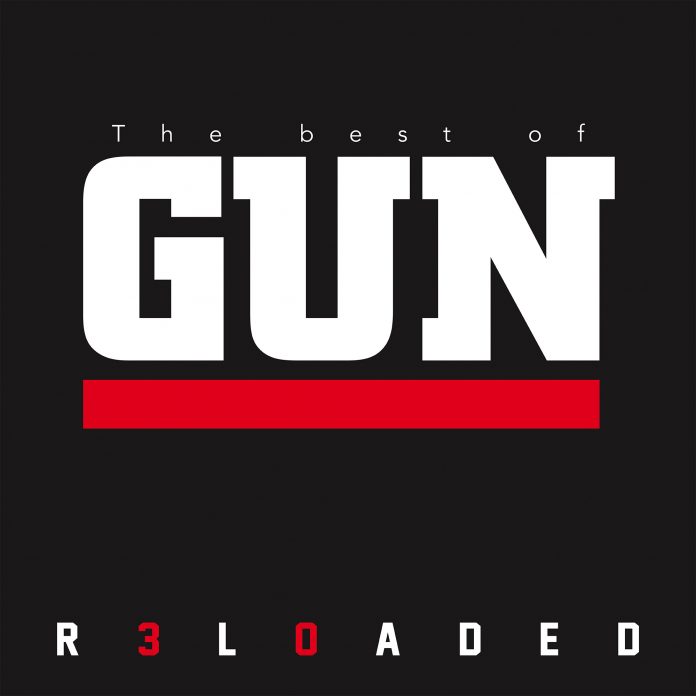 The British Big 4 – as no one called them but really should’ve – of great rock bands, is often underrated it seems to me.

We always want to look abroad at some “scene” or other, but around the late 80s, there were bands right here who were amongst my favourites – they still are.

For the record, Thunder, The Almighty, Little Angels and Gun, in my book anyway, were as good as anything across the pond.

And, it is the latter of the quartet we are concerning ourselves with now, because they’ve been given a best of.

To deal with the obvious, of the ten songs on disc one, most of them are from the first three albums. There is nothing from the “Popkiller” record. Nothing from “Frantic”, and the fact that there are two from the “Favourite Pleasures” album from 2017 probably shows they feel that one is a return to form.

Gun are not a band I haven’t listened to in years either – I am a genuine fan of them – so for me at least it is not a case of reacquainting myself with old friends, as it were. The likes of “Don’t Say Its Over”, “Better Days” and “Steal Your Fire” remain as some of my favourite songs. What I will say – with all due bias – is that they’ve lasted a lot better than some from the era, and in fairness, better than “Crazy You” from the overtly pop “0141 632 6326” – and yeah I rang the number back then, according to Wiki, it is now a Driving School in Glasgow.

The last one is their definitive statement, too. “Taking On The World”, the title track of the debut album, and the one that the audience sings when they play it now. And actually, the Gizzi brothers still are. The rest of the band from that era might be doing other things – Alex Dickson playing with some of the biggest pop acts ever, Mark Rankin the singer working for one of the big record companies – but Dante and Joolz are keeping the flame alive.

Which is where Disc 2 comes in, because someone, somewhere had what turned out to be a really good idea. It probably went like this: “ ‘ere lads, you know you had that huge hit with “Word Up”? Well, why don’t you make a CD of covers?”

And to be fair to them, they’ve – largely – eschewed the obvious too. Ok, “Word Up” is here – course it is – and “Fight (For Your Right To Party)” (“mom, you’re just jealous, it’s the Gun boys…..” is how they get round the Beastie Boys thing), but the rest, well, the rest sound like Gun making the songs their own.

“Every 1s A Winner”  is way better than you might think, “Superstition” too – that one is the best it, urmmm….swaggers? – and whatever else you say, you have to admire the fact they’ve basically made Blondie’s “Union City Blue” sound like Deacon Blue.

Iggy’s “Success” is given a Bowie-like makeover, and I am not going to lie, I’ve never heard  the original of “Take Me To Church” (its by Hozier, apparently) but this is weird and quirky. Leonard Cohen’s “Everybody Knows” has a bit of a Springsteen-ish thing going on, and “Diamonds” (the other one I’d never heard) I assume doesn’t sound like this when Rhianna sings it. Can’t say I care much to be honest.

Oh and the other thing this proves is if you’re going to do “Rock The Casbah” you can’t help but have it sound like The Clash, no matter how hard you try.

The collection does prove something rather more important, though. Not that it should have needed proving, but it’s this: at their best Gun are as good as anything out there.