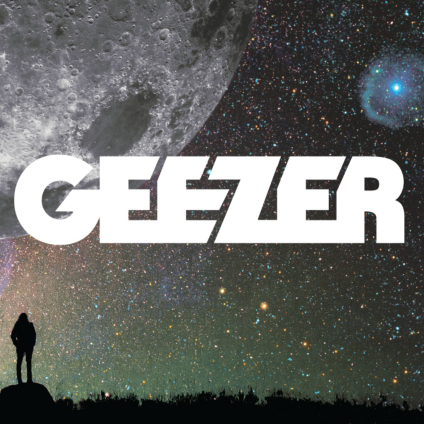 What’s the old adage? Something about never judging a book by its cover? Well Geezer, hailing from Kingston, New York, have come up with something of a variation on the theme.

Never judge their debut album by its first track seems to be the suggestion here.

“Sunday Speed Demon” – a track we featured on MV a couple of months ago – was equal parts Corrosion of Conformity, Thin Lizzy and Fu Manchu, and crucially it did its business in just over three minutes.

Somewhat ironically perhaps, you can judge this album by its cover. A lone bloke looks at the moon and the stars, and is perhaps dreaming. And it’s that kind of Kyuss infused desert rock rumble that abounds everywhere else.

“One Leg Up” – even the lyrics say this is caveman music – is cheerfully and gleefully Neanderthal and brings with it a wonderful hypnotic and pulsing urgency, while the near ten minute “Sun Gods” is even better, as it twists, turns, meanders and thuds, going where it wants to and acting like a brief history of all the bands it wants to be – even starting with a proggy spoken word passage. It is every inch the album’s centrepiece and its finest moment.

“Bi-Polar Vortex” with its big, thick riff, is the heaviest thing here by some way, and lives up to its title by its peaks and troughs. “Dust” is almost the last of the quartet in the middle of this that have echoes of Monster Magnet circa “Superjudge”. Fuzzy, yes, but it could still drink you under the table and hold its own at a biker rally too.

The other three are somewhat shorter, “Hangnail Crisis” is blues at its most primal – or put another way, if John Lee Hooker had Geezer Butler as a bassist, he might have sounded as dark as this. “Superjam Maximumus” is big, groovy and fun and “Stoney Pony” gets awards for three things. First, titles that rhyme absolutely rock, second its superb, but third you have to love any song that begins with the line “my girl, she’s built a like a pony” and arguably filthier from there.

Geezer are perhaps deliberately enigmatic. Their debut EP marked them out as something special, this EP merely confirms the idea.  They might play the beer drinking and hell raising thing to the hilt, but guitarist Pat Harrington and powerhouse rhythm section of drummer Chris Turco and bassist Richie Touseull are way more skilful than they let on.

“Geezer” the album, and Geezer the band are both full of surprises.