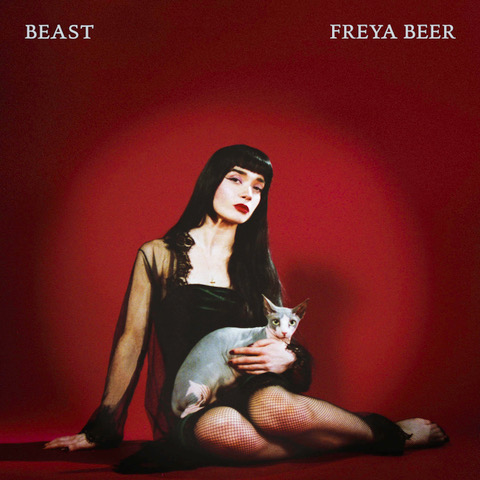 Freya Beer is a singer-songwriter from West London. Inspired by art and literature, alternative fashion, and music. She is known for mixing poetic lyrics inspired by Charles Bukowski or Anne Sexton, with the distinctive gothic stylings of Nick Cave, Johnny Cash, or David Lynch.

Her debut album ‘Beast’ is released this month and many of the songs on it are inspired from characters seen in classic cinema. As Freya explains: ” With most of my songs I always tend to take inspiration lyrically from film story plots that I’ve interpreted into my own personal experiences.” she says. “The songs of “Beast” all have elements of empowerment with a gothic undertone. The album takes you on a journey, right from the opening title track (“Beast”) that follows through a euphoric dream of a devilish figure to the closing track of “Put it to the Test”.

The album opens with title track `Beast` and as the title suggest that`s just what it is, a monster. We have a tribal drumbeat and Freya`s vocals that reminded me of Siouxsie Sioux circa `The Scream` atop. As the number progresses we have a blistering underlying guitar riff that underlines the message of the song which is all about the conflicting feelings that can shadow a sense of empowerment. Again, we have a pounding drumbeat and buzzing guitar riff at the heart of `The Calm Before The Storm` which has a delightful intensity come anticipation of something ominous to come. A track inspired from “the association of feminine energy and the phases of the moon.” Wonderful stuff.

`Forget it` has a rolling churning quite mesmeric almost dreamy texture about it with occasional guitar bleeds and draws you in as it develops. There was a slightly disturbing almost off kilter nursery rhyme like vibe to `Secret Garden` a place where you`d be tempted to enter but could be like a spider`s web to a fly.

`Arms Open Wide` is loosely inspired by the chilling atmosphere of ‘Tubular Bells’ and does have some chimes frequently shared throughout but to me it also had a slight captivating Middle Eastern orchestrated texture. A song drawing on the singer`s literary influences like Allen Ginsberg’s ‘An Asphodel’ and Anna Sewell’s ‘Black Beauty’ comes with `Dear Sweet Rosie` and it’s a stripped back, another submission with an edge and with lyrics that the artist feels can be interpreted in a number of ways.

A painting by John William Waterhouse that depicts a siren sitting at the edge of a cliff, lyre in hand, staring down at a shipwrecked sailor floating in water, who in turn is staring up at her is the inspiration for `Siren` a delightfully enticing number that has a sort of retro sensibility with bleeding flowing guitar chords and the inviting chorus of “you don’t know unless you go all the way, but I’m your siren and I’m here to stay” accept at your own risk. I have to say I adored `To The Heavens` it almost hypnotised me, does it have some religious or spiritual connotations i`m not sure but there`s something about it that had me hitting the repeat button.

`Pure` had a stark stirring splendour about it and could have come straight out of a David Lynch production, marvellously compelling. We enjoy a much faster paced rock out with the intoxicating `Beauty` which at times had the lyrics shared in a near spoken word context. Amongst the lines is a mention of belladonna which refers to the “beautiful women” of Renaissance Italy, who took to enlarge their pupils, which they found more alluring. But it also goes by a more sinister name, deadly nightshade, that implies a darker history. The choice is yours.

The album closes with `Put It To The Test` which to me was almost a musical triptych of sorts. The first part beginning with a vocal introduction that seemed to refer to the biblical forbidden fruit growing in the Garden of Eden and it`s allure which is shared over a charmingly strummed guitar. The midsection has darker sounding electric guitar chords with pounding drum and cymbals allowing a platform for the sung enticement or temptation. Finally, we return to the climax or aftermath where one is left to imagine the outcome as the lyrics betray “I found your weakness” against a backdrop of strummed acoustic guitar chords and piano keys. A stunning conclusion to this album.

Freya Beer has a wonderfully alluring and very captivating vocal range and I thought that `Beast` was a stunning debut release. The addition of Owain Hanford (drums and all percussion), Arnoldas Daunys (bass), and Peter Hobbs (lead guitar), who also produced the album was a stroke of genius.

Freya has that charisma and vocal ability of artists that had led the way such as Siouxsie Sioux and P J Harvey and I only hope that she attains some of their success, on the strength of this release, she certainly deserves it.