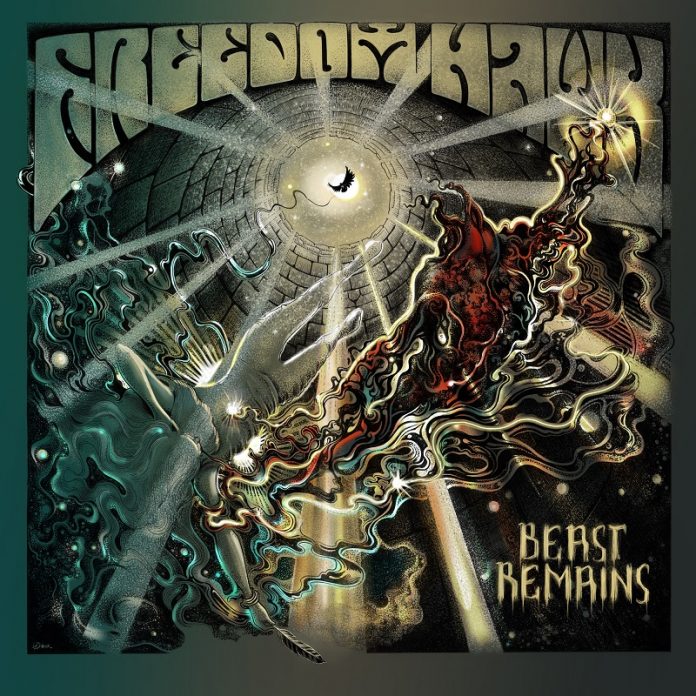 Heavy sounds from Virgina that so it their way

It is interesting that for this record Virginia’s Freedom Hawk are back as a four piece. While it is the unshakeable belief of this website that there is no such thing as a bad trio, there is something about FH’s sound that lends itself to being a quartet with two guitarists.

That might be because that unlike a lot of the bands who wish they were around in the 70s, Freedom Hawk are not shy of injecting some real metal tinges to their mix.

The results are here in these eight songs. Whilst you can’t call them unique, at the same time, it is a challenge to compare the band to anyone.

To get down to brass tacks – or gold ones in this case – the net result of all this is that “Solid Gold” which opens things here, doesn’t so much announce itself as stride in to do business immediately. And, well, riffing is that business and business is good (if we may torture that paraphrasing any further). However,  the really clever thing about this is that it never veers into bombast and maintains a soulful way of doing things throughout. No matter how much it chugs.

It is one of the hallmarks of Freedom Hawk (and new boy Brendan O’Neil has fitted in perfectly in this regard) that their guitar sound is one of the smoothest around. There is a real NWOBHM feel to parts of “Danger” but it never veers directly into denim and leather territory. This is far too savvy for that.

Where Freedom Hawk score heavily on “Beast Remains” is that nothing outstays its welcome. There is a bass thump to “Darkness And The Light” that injects a real urgency, and “Brutal Winds” seethes. Gale force, it may be, but it lives up to the band name and soars, going wherever it may be. Doing so in just over five minutes is a real plus point. How good is it? Well if the riff from Paranoid was mixed with something from Maiden’s first album and still sounded modern, how good would that be? ‘Nuff said, yeah?

The title track continues on the Sabbath trip, but also manages to sound like those occult metal bands too, you suspect just because Freedom Hawk thought it would be fun to do – it is, too.

Not that they are anything like done. “Deep Inside” chugs along like Monster Magnet at their most hypnotic, but it – and everything else here in fairness – has to give way to the quite wonderful “Coming After You” which gets rock n roll bonus points for starting with a solo, even more for its use of cowbell and still more besides given that it has the skill to veer from outright heads down rock to become something else entirely.

The feeling that however good they’ve been up to this point there is still more to come from Freedom Hawk is all over the this. “Champ” ends on a chest beating note. “In a world of losers” sings T.R Morton, “I am the other one.” It’s got the presence of mind to do some twin guitar too, which is always great and it even finishes off as of on stage.

The always superb Freedom Hawk have done it again, in fact they’ve done a little bit more than the usual. They’ve come up with what might be their finest work. For them, four is the magic number. They’ve entered Beast Mode here.