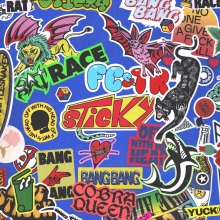 To understand “Sticky” – and I don’t know if I’ve got it right, just how I interpreted it – then it comes to these words: “I never want a lockdown again!”

Frank Carter screams that sentence at the end of “Go Get A Tattoo” – a track about halfway through “Sticky” – and in so doing he speaks for those of us who saw our lives effectively ended in March 2020. Those of us who need a routine, and suffered from latent mental issues anyway. And who, by October 2020 had people so worried about them they were concerning the West Midlands Healthy Minds Service.

That’s me, obviously, and I don’t hide it. I am better now – not totally, but way better – and as such, a lot of themes of “Sticky” resonated with me. And maybe you, too, which is why I am writing it the way I am.

Frank Carter is nine years younger than your correspondent, and his experiences are not mine – I don’t remember the last time I had a wild night – and the whole of “Sticky” seems metaphorically to take place in the pulse of a nightclub – but there’s something he says that makes sense: “I’m a 5ft7 redhead. I’m the epitome of trying to present a tough guy image just to be left alone. I guess because that’s what society told me I needed to be”. I am not a redhead, but substitute a pair of sticks in my hands (which I’ve had all my life and had to pretend I wasn’t fussed about for 46 years) and I get the anger, the bravado.

What I couldn’t do and Frank and Dean Richardson can, so brilliantly is channel these feelings into music and make it universal.

Equal parts the Sex Pistols and The Prodigy, this is punk rock the way Carter has always done it, with no rules and no barriers.

One of the subjects that Carter has always written about is masculinity and what happens in it goes wrong. It’s not by accident the gay rapper Lynks appears on the stunning electro smash of “Bang Bang” (a track that takes down the façade with a mallet).“Take It To The Brink” is close to being as good as that, in fairness, and the delivery is filled with an incredible energy.

Lynks is not the only special guest here  – not by a long shot – and Joe Talbot of IDLES thunders in “My Town” (“my town it looks like yours….and no one gives a fuck at all”) and its filled with a nihilism. Cassyette duets effectively with Carter on “Off With His Head”, which in common with all of these has a chorus that is basically made for the moshpit.

“Cobra Queen” is more pop orientated, and but, like everything here, it does nothing by half-measures. Has Frank Carter ever done anything by half measures? Before the dirty grooves of “Rat Race” – which introduces some sax into the chaos  – nails it: “We all lost a year to the doldrums”.

Remember what we said about special guests? Well how does Bobby Gillespie of Primal Scream grab you? He brings his breathless delivery to “Original Sin” – on which Carter sounds truly desperate in his maelstrom, and BG delivers a note of calm.

Like all great records, “Sticky” will mean different things to different people. What I have written above is my take on it, you will have yours, and The Rattlesnakes may well have meant it in a totally different way than I interpreted it. So lets just agree on this: It’s brave, raw, bold and brilliant.