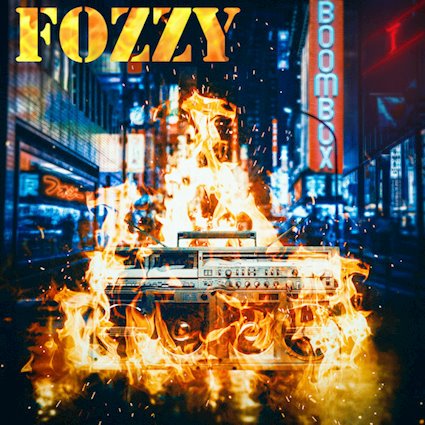 Chris Jericho is a wrestler.

There, we’ve got it out of the way.

Chris Jericho is also the singer in Fozzy, and must be said, one of the finest frontmen on the planet. Just before Christmas last year MV went to watch the band play. He had 800 people (the show was sold out) wrapped around his little finger.

I guess its difficult to know where the showman ends and the real man begins, and it’s a dichotomy that seems to be at the heart of “Boombox”.

Take these words: “I’ve put a million miles upon these bones/Living out this villain I portray/There’s nothing left of me after the show/The devil made a deal that I can’t break” he sings those words on “I Still Burn” – one of the singles that was out as a taster, and that perhaps indicates that this is a darker Fozzy than the one that was “Drinkin’ With Jesus”, say.

The collection begins with “Sane” – and with an icy, almost industrial blast – but its business as usual and Rich Ward pumping out riffs that are best described as “muscular”.

They are a very American band, are Fozzy. There’s no group from this side of the pond that would be close to pulling off “Purifier”, in truth. An arena shaker, it was brilliant live and so it is here. Hooks, choruses and everything that modern rock needs.

There’s kind of a Stone Sour vibe, even on the acoustic ones like the fragile ballad “Army Of One” (opening line: “I sleep with one eye open, I never trust in anyone”) lays bare struggles with mental health. “Ugly On The Inside” on the other hand, sets its sights on someone and reprises Daphne And Celeste (lets just say it rhymes “U.G.L.Y” with “alibi” with no hint of irony).

“Relax” (yes, that one) is better than it might be, and the damn thing sticks in your head like its 1984 all over again, but for all the novelty that might engender, it has to be said that “Boombox” is state of the art modern kit. “Nowhere To Run” is unashamed that its chorus is better than your chorus, and while there’s no massive surprises here, the fact it plays it straight down the line is actually its strength. “My Great Wall” is made for fists in the air, and occasionally there’s a real heavy gut punch. “What Is Hell Is Like” for example, and if “Omen” swirls menacingly, there’s still the very real feel that Fozzy can fight off all evil spirits with their rock. Ward’s keyboards, though, are pivotal throughout.

Nothing’s too long here, as if they are all made for radio. “The Worst Is Yet To Come” has hit single written all over it, and if there’s a real suggestion that the five piece have basically nailed modern US rock in about 40 minutes, then “Welcome To The Vulture Club” isn’t exactly going to disavow you of that theory.

Ultimately, this isn’t the most original record that’s ever been made. It isn’t supposed to be. This is why: “Being awarded a gold record has been a dream of mine ever since I started listening to The Beatles at nine years old and saw a picture of them getting an award for ‘Beatles VI’,” says Jericho as he spoke about “Boombox”.  “Then as I grew older and heard Ozzy talk about his “gold discs” and seeing the walls of Rudolph Schenker’s house plastered with framed Scorpions awards, I set my goals on someday getting one of my own.”

You’re getting another, Chris.