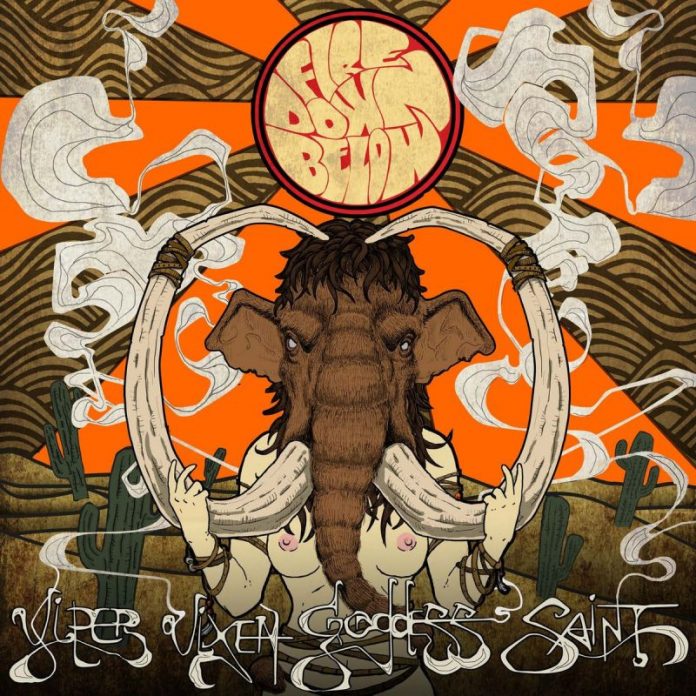 It’s stoner, but not as you know it….

Ok, so the age of bands selling bucketloads like AC/’DC or Guns n Roses might be over, but creative kids with a guitar, some songs and a dream, are still out there and doing it.

Step forward, Fire Down Below.

“Viper, Vixen, Goddess, Saint” originally emerged last year, as the Belgian quartet cut out the middle man and did it themselves. The thing was, like the cliché says: “be so good they can’t ignore you”.

With that in mind they caught the ear of LA’s Ripple Music, who are the perfect home for this kind of quirky fuzzy blend. Fast forward eight months and here it is getting a worldwide release.

Well deserved it is too.

It might open with the sound of the desert, the instrumental “El Viento Del Desierto” but this isn’t some Kyuss knock off. Sure the riffs are dry on “Through Dust And Smoke” but there is a lot more to it than that. There is a grunge type feel here and there is something of “Badmotorfinger” era Soundgarden about it, and it is extremely cheerful to bring a huge chorus and hook into things too.

“Roadburner” is just a classic song, you can cut it any way you like. You can say it has elements of Truckfighters, maybe a touch of Red Fang and you wouldn’t be wrong, but there is a youthful insistence, a chutzpah if you will. Pulsing with energy and electricity it is the undoubted highlight here.

But, here’s the thing. You aren’t going to second guess them. Certainly not at this stage. There might come some time in the future where they settle on one sound, but that time isn’t anywhere near here yet. “Universe Crumble” is trippy and blissed out psychedelics, but as if to be contrary, they follow it up with an out and out stoner rocker in the shape of “Dashboard Jesus” which isn’t far from being the heaviest thing on offer. This is then balanced by a bluesy acoustic strum called “Resurreccion” and you can almost hear their glee at confounding expectations.

The last song is another twist and turn too, and “The Mammoth” gives some clue as to where their ambitions lie. Over ten minutes long, it is the work of much more experienced men and simultaneously shows why people are getting so excited about Fire Down Below.

On the strength of seven songs you wouldn’t necessarily want to place too much undue pressure on them, but to call this promising would be to do it a disservice. Instead what we’ll say instead is this: this is a mighty opening statement and album number two – due next year – could be a real masterpiece.