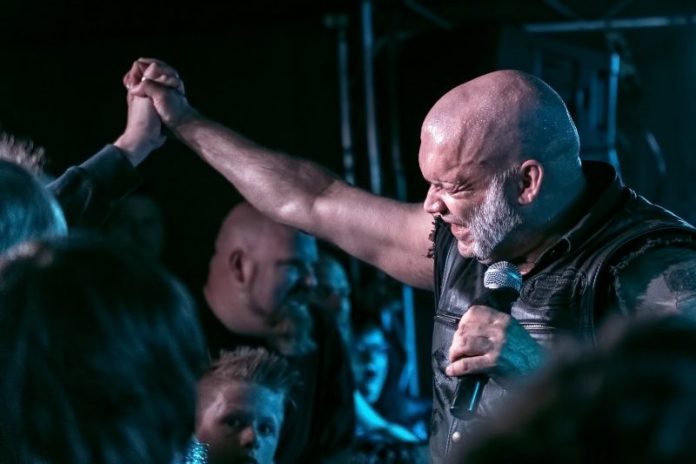 Blaze Bayley, singer with Iron Maiden 1994-1999, has extended his ‘Endure and Survive’ World Tour to include 24 shows in USA and Canada during August and September 2017.

The tour lasts 4 ½ weeks and includes a date at Hollywood’s famous Whisky a Go Go on 4th September.

Blaze and the band are on top of their game and fans should expect a uniquely inspiring and high energy performance. A Blaze Bayley show is an experience that leaves an impression on fans that isn’t readily cast aside. That experience is shared by long-established Blaze fans, people returning to support him after last seeing him live with Iron Maiden, and also a new generation of fans that is discovering his music for the first time.

‘Endure and Survive’ is the ninth album of Blaze’s solo career, was released in March this year and is the second in the ‘Infinite Entanglement’ trilogy which follows a sci-fi concept and storyline. The trilogy has marked a renaissance period for Blaze with a significant upturn in fortunes across Europe, encouraging him to make this forthcoming trip to USA and Canada.

Blaze explains…. “I’m so excited about coming to USA and Canada for the ‘Endure and Survive’ part of my ‘Infinite Entanglement’ tour. I have great memories of touring there with Wolfsbane and Iron Maiden. I’ll be doing a few songs from those days and some songs from my new albums. As a thank you to my fans for waiting so long for this tour, I will be doing a free meet and greet after every show, signing any CDs and albums that I’m featured on. I’m fitting in as many towns and cities as I can on this tour and I’m hoping it will be possible to tour USA and Canada every year if fans want me to return”.

The past couple of years has been a rewarding period in Blaze’s career, where both his performances and heritage have attracted the attention of contemporary metal artists such as Disturbed who invited Blaze to guest with them at the UK’s premier music festival Download, and Sabaton even joined him for an impromptu version of ‘Man on the Edge’ in Poland. Blaze was also delighted to be invited to perform at the prestigious inaugural Heavy Scotland festival where Arch Enemy and Behemoth were headliners.

The full tour schedule confirmed is as follows….

For further information visit these sites….