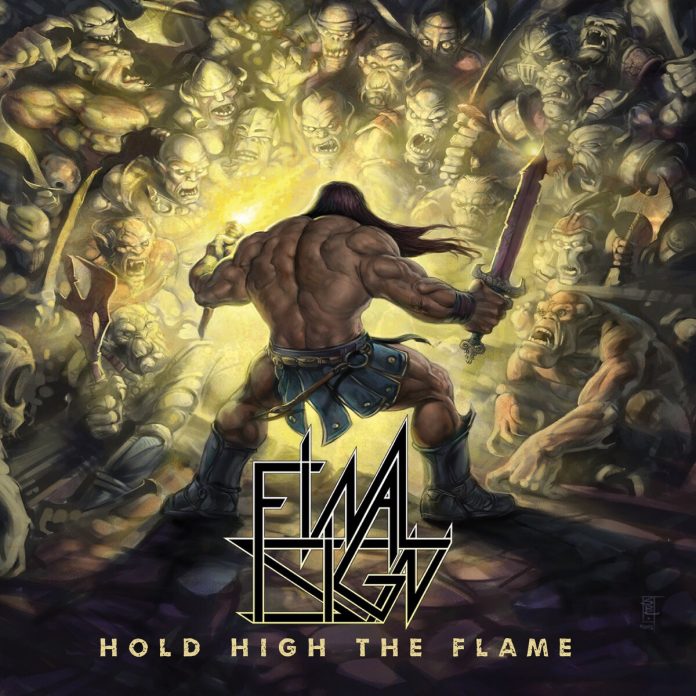 Horns up boys and girls. The album that took 16 years to happen, delivers in 40 minutes.


The musical partnership between Final Sign vocalist Shawn Pelata and guitarist Brian “Hellstorm” Williams dates back to 1999, when the two collaborated on a project. They reckon they always vowed to work together again one day, and now some 16 years later, the time is right.

To finish the history lesson, “Hellstorm” – and believe us when we say he lives up to that name here with riff after riff fired out at breakneck speed and with something approaching evil glee – then returned to October 31, the underground metal band he was in, while Pelata went off and did some melodic rock stuff as well as working with Deathcore heroes Killwhitneydead when they needed some accessible stuff on their tracks.

Now, finally ready to work together properly, they have, as Final Sign, constructed something timeless.

“Hold High The Flame” isn’t breaking new ground, and moreover you’d guess it isn’t trying to. What it is instead is eight tracks that blend heavy metal, power metal and thrash just about as well as anything has this year.

The guitar work is magnificent and Pelata clearly has a formidable voice. The duo together with the rhythm section of Kevin Haverlah (drums) and Howard Baker (bass) supporting them ably, “……Flame” is appropriately pretty hot.

And, it’s one of those albums that gives most of it’d secrets away early on, that is to say, that is to say, if you don’t like the classic stylings of “Daring The Sun” you probably won’t be too keen on the rest of it either. But rather more positively, if you long for the days when metal was metal and ensured that denim and leather really were gonna bring us all together, before things got fragmented into bullshit sub-groups then horns up, brothers and sisters.

There’s a real clenched fist mentality to “Burn The Temple Down” and the title track, which has a real Saxon type vibe, is so bursting to rock it’s tits off that it starts with a solo as Pelata unleashes his full range.

“Possessor” is positively violent in its anger and is perhaps the most overtly thrash thing on offer, with “The Sinister Silence” getting in and out at under three minutes, but also doing its job superbly. Like “Scaling Lies” it thinks it’s mid period Maiden, but the latter, with its acoustic verses, acts as a fine counterbalance to everything else here.

There’s a sense, though, that Final Sign are a little happier giving themselves chance to breathe. “Madness Eternal” is perhaps the best song here and fans of Priest and Dio will find plenty to enjoy in its near six minutes, while the maelstrom of “The Ominous Black” is not only a brilliant closer, it’s the heaviest thing that “…..Flame” has to give, with mighty breakdowns and machine gun riffing abounding here.

It might have taken 16 years for this partnership to bear real tangible medical fruit again, but those that have missed Iced Earth during their hiatus would do a lot worse than investigate “Hold High The Flame”. Some things, you know, they are worth the wait.