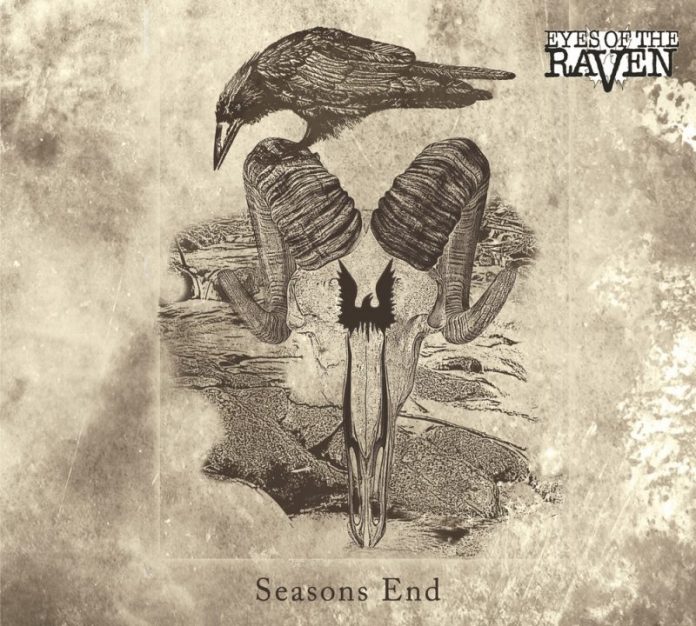 At the time of writing, on the Eyes of the Raven Facebook page, the cover photo encapsulates everything that is both wonderful and maddening about the five piece.

And you have to say that it is brilliant pisstake from a band that features some of the nicest blokes you could meet, and who have never knowingly taken themselves too seriously. But it’s annoying too, because “Season’s End” is so good that it leaves you wondering where it could have taken them in different circumstances.

Even without recorded output, EOTR have been good enough to get gigs all over the place. Even this, though is a double edged sword. Why? Because it’s rare to listen to a record that is ostensibly new, but one where you know all the words.

On the plus side, however, it means MV already knows that “Redeemer” is one of the best songs of 2016 (just like it has been for years) with a groove that Orange Goblin could nick, with the intent of “Blood Fire And Love” era The Almighty and a chorus of any great rock song ever, it is rather good.

Not that the other four are shabby, mind you. “Cast The First Stone” has a dirty old swagger and seems to want to fight the world, “Lessons In Blasphemy” is essentially the words “take that, religion” set to music as Dave Horan on vocals knocks out his best Ben Ward impression and “Sometimes Bruised, Never Broken” is very much their anthem – and is a real clenched fist of defiance.

The last song is also the heaviest, and “Bury My Demons” seethes with an anger that you cannot fail to be swept along with. It gives a brilliant EP a fitting conclusion. Eyes of the Raven might take longer than Axl Rose to get a new one out, but by crikey this is better than Chinese Democracy.