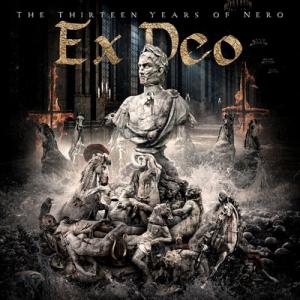 Back through the annuals of time there are few figures that conjure up the image of decadence, extravagance and devilish tyranny more than Nero Claudius Caesar Augustus Germanicus, or simply Nero, the fifth emperor of Ancient Rome.

Adopted by the then current emperor Claudius at the age of thirteen he would succeed his adoptive father just four years later.  If I remember what I was doing at the age of seventeen, taking over a burgeoning empire across the known world wasn’t one of the things that immediately filled my days.

Obviously over time stories and exaggerations have been made about Nero so not all that has been written about him should be taken seriously.  What is clear though is that initially his ascension to leader of the Roman world was greeted very positively, particularly amongst the lower classes of Roman society.  Given his youth when he took control it is not surprising that his mother Agrippina (who married Claudius following the death of Nero’s father) was a looming presence in his formative years in power.  All this made for a very turbulent but fascinating period of Roman history. History lesson over and onto the music.   Ex-Deo have tackled the birth of Rome and battles various on their debut album Romulus, the Punic wars with Carthage and one of Nero’s predecessors Caligula.  All those albums have their own unique stamp but an identity that is uniquely Ex-Deo.  This new album is no different.

We begin the assault on the senses with foot-stomping, spear waving, shield banging album opener “The Fall of Claudius” which commences with the stuttering tones of Claudius before tearing into a familiar and powerful aural homage to end of his reign, possibly murdered by Agrippina.  The riffs are huge and the orchestration sublime.

“Imperator” follows in a very similar vein with a battle vibe that lures you in before leading you on an unstoppable charge towards the enemy.  The track acts lyrically as a portent of things to come in Nero’s reign.  “The Head of the Snake” begins the downward trajectory for our anti-hero as his descent into madness and paranoia become apparent surrounded by a crushing riff and menacing undertones.  The tempo changes throughout the track from brutal blastbeat fury to galloping forward momentum.

Tracks like Boudicca (Queen of the Iceni) which feature the vocal talents of Brittney Slayes (Unleash The Archers) and Britannia: The 9th at Camulodonum, now modern day Colchester, move the action from Rome to the warring tribes of Britain.  Anyone familiar with the Sky Series Britannia may get visual understanding of the age but if not then allow Ex-Deo to provide the aural representation of the time.

The second half of the album continues with the cinematic strains of “Trial of the Gods (Intermezzo)” plays like an ancient version of Sergio Leone’s masterpiece The Ecstasy of Gold.  Yes it’s that good.

“The Fiddle & The Fire” tells the story of Nero supposedly fiddling whilst Rome burnt during the great fires of 64AD.  It is a shift away in tone and pace from the previous tracks but none less powerful and emotive for it.  The album closes with the burning rhythmic intensity of “The Revolt of Galba”.

From start to finish this album is a stunning insight into the ancient roman world through extreme metal eyes and ears.  The two are a perfect marriage in the hands of General Maurizio Iacono and his centurions, JF Dagenais (guitar), Stephane Barbe (guitar), Dano Apekian (bass) and Jeramie Kling (drums).  Special mention should also go to Clemens Wijers for his outstanding orchestration.

If you are a student and need to submit a thesis on Nero and have not done your homework just shove a copy of this in front of your teachers, tell them to turn it up to 11.  Job done.

The Thirteen Years of Nero is out now via Napalm Records