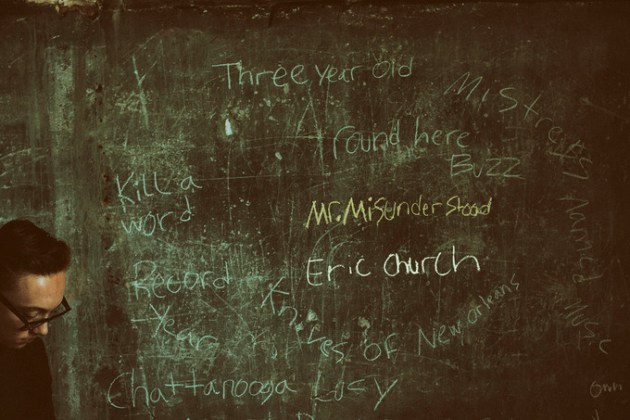 Not a new album from Eric Church, instead “Mr Misunderstood” emerged late in 2015 released first to his Fan Club then to iTunes, it is now being re-issued by Spinefarm Records (home to Cadillac Three and the incredible Whiskey Myers) with a smattering of live tunes and expanded artwork.

The fact is, though, that any new material from Eric Church is cause for celebration. Over the course of his four previous records he has proved himself to both be at the vanguard of the modern country movement, simultaneously not giving a monkeys about the constraints that might entail.

Indeed, it is not for nothing, you suspect, that this record begins with its title track. As so often Church doesn’t do the conventional. It starts with a strum, but namechecks Jeff Tweedy, Jackson Pollock and is an autobiographical tour de force before it builds to a rock n roll crescendo.

As an example of what makes Eric Church so special it is right up there, but there are others here too. The dark blues of “Mistress Named Music” or the thumping, funky soul of the magnificent “Chattanooga Lucy” – which also appears as one of the live cuts at the end – show the breadth of his material.

At times it almost feels that an opportunity for Church to try as many things as he possibly can. There is a longing about the clever duet, featuring Susan Tedeschi “Mixed Drinks About Feelings” and a bleakness about “Knives Of New Orleans” but also a massive intent which is akin to Springsteen on “Born to Run”. All of which is odds with the claustrophobic feel of the small-town frustrations of “Round Here Buzz” and the almost pop stylings of “Kill A Word.”

Church does things in a way that others don’t. There’s a light and airy sense of contentment about “Holdin’ My Own” and the line “if I’m proof of anything its that God loves troubadours” is one of a man that knows how lucky he is to do this.

The last of its singles “Record Year” has top 40 radio written all over it, but better still is “Three Year Old” a gorgeous ballad which looks at life through the eyes of his young son – and a more uplifting song you will not hear.

As for the add on’s, well to be honest, they aren’t essential, there’s “….Lucy” and “…..New Orleans” plus about the four millionth version of ”Hallelujah” but they are only for completists.

The rest of us should just listen to Eric Church and, well understand that he is a rare and brilliant talent. When it was released “Mr Misunderstood” bagged the album of the year at the Country Music Awards and it went on to sell half a million copies. It deserved to.