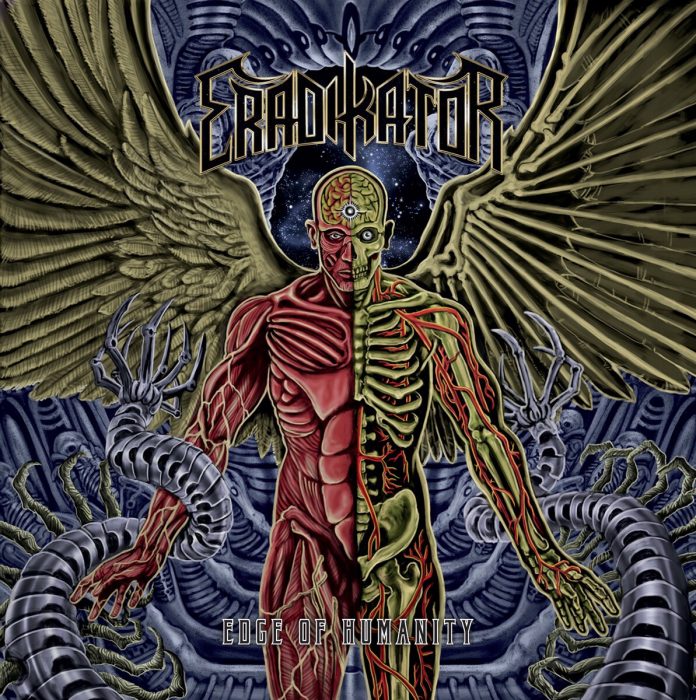 The best thrash band in Britain?

If you’ll permit a quick story, about eight years ago, MV went to see Megadeth. The opening act that evening were a thrash band called Evile. It’s a cliche to say they blew us away, but they did. And then something happened to thrash. All of a sudden it stopped – with the odd Testament, Annihilator and Exodus shaped exception (although the latter didn’t half spoil their shows by having a frontman best described as “controversial”) – being any good.

Then a couple of years ago, there started to be the odd sign of excellence in the underground again. Reign of Fury were – and still are – making their own waves, but the standard bearers in the West Midlands were Eradikator.

Now with a little more Nationwide acclaim – nationwide tours and spots at Bloodstock do that for a band – the Brummies are back with a new record, the follow up to the brilliant “Dystopia.” The band seem to know just how important this album might just be, and have drafted in Producer to the (metal) stars, Russ Russell, in to twiddle knobs here (Russell is on something of an underground hot streak, given his work on the incredible new Limb material). You don’t get in a chap that’s worked with Dimmu and Napalm Death if you are messing about, do you?

And it’s absolutely clear, right from the start of “…..Humanity” that its a) deadly serious and b) a copper bottomed, hi-topped thrash classic.

It’s lead song “Mesmerised” takes all of 15 seconds of build up to get thrashing and get cracking, there’s even a guitar solo before the vocals. This is old-school all the way, there’s no hint of a grunt or a growl here, this is thrash the way it used to taste, pure and simple.

Not overly long, it’s nine tracks are at once familiar, but at once fresh and bubbling with the same energy that all those young and hungry Bay Area bands had in 1984. It’s title track, for example, broods and does its crushing rather more slowly and Metallica-like then some of the other work here, not least “Astral Body” which is a twin guitar gallop.

Happy to embrace it’s influences rather than shy away from them, there’s nothing fake whatsoever about Eradikator, “Fortress Unknown” has echoes of Maiden in its soloing and “Seasons Of Rage” is seething and can barely restrain itself.

“The Great Deception,” which is such a sonic maelstrom it will surely create moshpits everywhere, fair old burns with anger, and “Dead Hands Of Past” gets its head down, it’s horns up and it’s feet on the monitor for a go down the fast lane. In that context then, last track “Kairo’s Passing” – a fabulously grandiose instrumental – is chance for us all to calm down and reflect on what is a wonderful piece of work.

The debates can rage as to how far this can take Eradikator, and to be honest, they are for another day and we’ll leave it others to judge. Instead we’ll proclaim it right now. Even allowing for the fact there’s more competition than normal, “Edge Of Humanity” might just be the thrash album of the year.