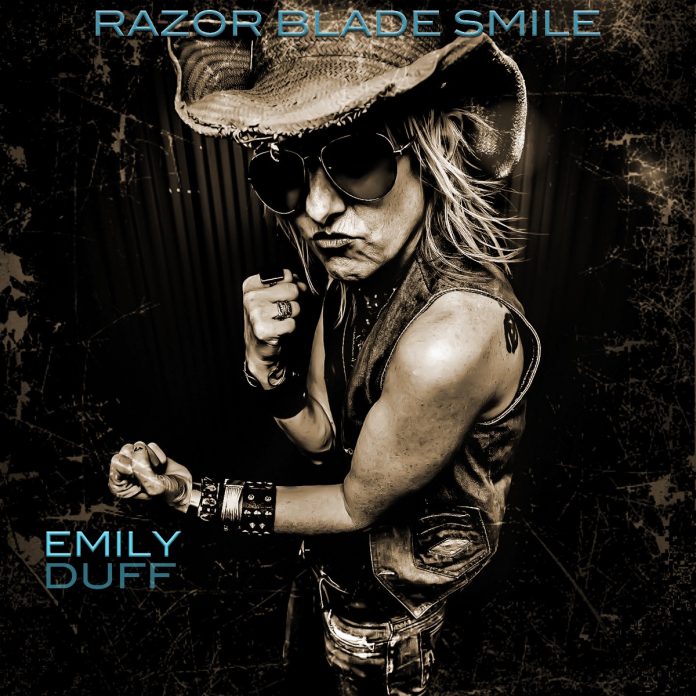 Emily Duff is a New York City born, Muscle Shoals veteran songwriter who has a new album `Razor Blade Smile` out this week which follows her relationship breakup album `Born On The Ground` which came out last year. Emily who sings and plays acoustic guitar has enlisted the help of some stellar musicians on this album with Eric Ambel (Del Lords, Joan Jett) on electric and slide guitar and backing vocals, Keith Christopher (Lynyrd Skynyrd) on bass, Charlie Giordano (Bruce Springsteen) on keyboards, Phil Cimino on drums, and Mary Lee Kortes on backing vocals.

The album opens with `Go Fast, Don’t Die` which reads like an anthem on how you should live your life. It was delivered in almost a marching cadence call and response style in her wonderfully understated vocal, a delightfully captivating listen. There`s more of a rolling beat to `Gimme Back My Love` which had some superb keys, a driving drum beat and a brief guitar solo midway through.

`Done And Done` is a reminiscence on a relationship that`s had it`s good times but is now buried firmly in the past. The fuzzy guitar riffs are sublime but so is everything on this track from the steady bass, soaring keys and almost hypnotic drumbeat. The vocals have that wonderfully thoughtful and reflective texture about them. There`s another introspective number with `Angry To Bad` which seems to have a hint of exasperation in the vocals about the situation this relationship has reached. There`s a brilliantly telling line with “I don`t care what your best friend said”

Title track `Razor Blade Smile` is more belligerent rock out, a sort of threat or challenge laid down from someone whom I’d have to say I’d decline to oppose. There was an almost frenetic pace on `Flying Paper Planes` a country tinged number where the skilfully rhythmic almost poetic lyrics were rapidly shared.

`Another Goodbye` is a meditative but pensive offering with a musical accompaniment that gave it an air of sorrow, loss but also underlying strength. A number that could have come out of Nashville follows with `Feelin` Alright` a mesmerising foot tapper which had subtle accordion tinges initially but blossomed into an almost zydeco style towards the later part of the song.

`Don`t Hang The Moon` had a real edge to it. A tale possibly of somebody who lives and loves on their own terms. There was a sense of the narrator wanting to commit but almost a feeling of anticipation and unease shared in the vocal delivery. The album closes with `Nicotine & Waiting` which has Cody Nilson joining on pedal steel guitar. The singer has related that it`s a view of having too much time on your hands that could “push you into self-destructive coping mechanisms”. A stunningly reflective submission where the lyrics nearly paint a visual, they are that well expressed.

Classic Rock have said that Emily`s vocals rise to the top with “grit, honey and melody” and it`d be difficult not to agree. `Razor Blade Smile` is a cracking album where this singer, songwriter and guitarist has recruited some gifted musicians to help her realise this varied and delightfully, tender, thoughtful, reflective, and captivating composition.

Emily Duff to me will be the torchbearer for this generation, following the likes of Emmylou Harris and Lucinda Williams.