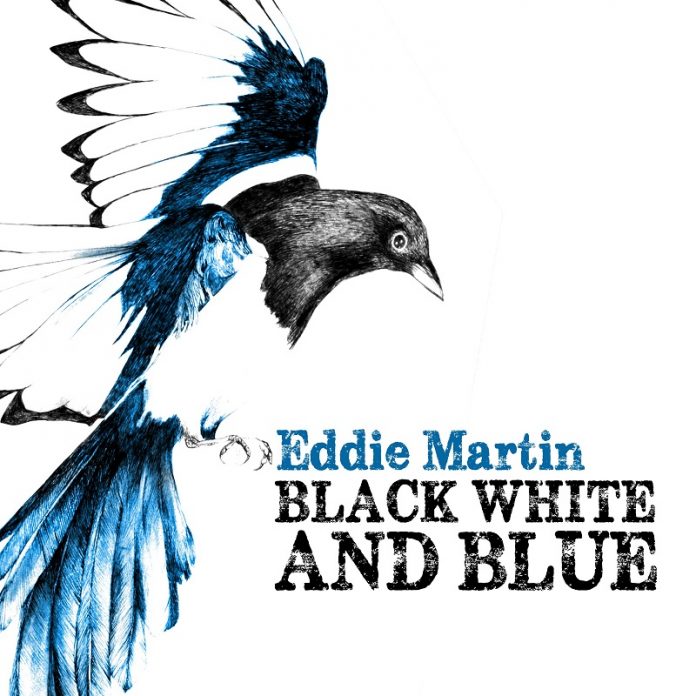 Blues with a social conscience

Called the “Ambassador of British Blues”, Eddie Martin has keeping it real for 30 years.

This is his 16th release too, and he is in tremendous form throughout “Black, White And Blue”, but then, let’s be honest about this, so are a hell of a lot of blues players right now in the UK. But, here’s the thing, and this is why “…..Blue” is a fine addition to the likes of the Danny Bryant, Stevie Nimmo, Robin Trower and Ben Poole album’s we’ve loved so much this year.

It recognises that it’s a bad old world out there and is more than happy to commentate on that fact. As early as the second song – a glorious piece of harmonica driven blues called “Angry” for a reason – Martin is raging about austerity and suggesting that “the hippy dream is up in smoke”, and this social commentary sets the record apart quite wonderfully.

He’s back on this kind of trip elsewhere too. The brilliant “Too Much Choice” takes consumerism to task over the course of four minutes. Rounding on Simon Cowell, technology, bottled water, skinny jeans and anything else you can think of that might bother, lets call them “men of a certain age.” Indeed, by the end of it, MV was yelling “preach on brother” and looking to vote for the Eddie Martin Party in the next election.  If Billy Bragg made a blues record then its tempting to think he might make this one.

But even we men of a certain age are merely participants in the technological age. “I’ve Lost My Phone” recognises this fact. At first glance the jazzy thing is throwaway and out of place, then you think: “christ, would I do if I lost my phone….”

And perhaps tellingly, the record ends in a dark place too, with “It All Depends” which broods in a rather melancholy way, but in between, it moves into more traditional blues territory

That’s surely because Martin is too skilled a player and too skilled songwriter to shackle himself to one theme. “I Choose You” is an evocative love song, while “Song Of Five Things” is a more traditional thing with snippets of “In My Time Of Dying” amongst others, while the slide guitar playing on “How” is quite wonderful.

The title track too stands out. A brilliant song about love across racial divides, it suggests “we are now a blend, and the history is bruised, we are now black, white and blue” this is a metaphor for the genre itself, “where the African legacy shines like a jewel”.

2016 has been a wonderful ear for the blues. Here’s another album to add to that collection – even if it doesn’t do quite what you expect. Make an appointment with the ambassador at your earliest convenience.