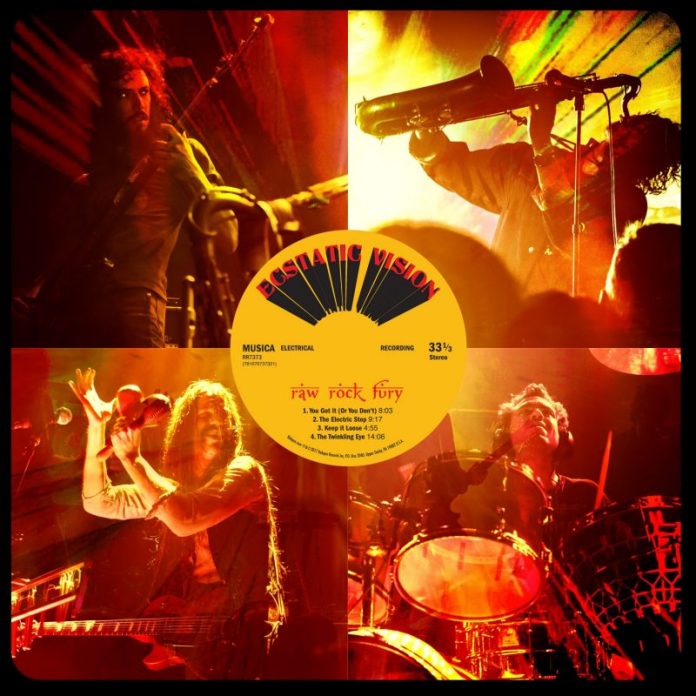 Holy hell – you describe this…..

Back in 1998 – when it was still funny, but that’s probably another debate for another day – there was an episode of The Simpsons which saw Homer become a hippy. He took his new mates for an old school Freak Out to frighten the squares. His music of choice for this escapade? Billy Joel’s “Uptown Girl.”

All fine and dandy, obviously, but let’s be clear. If they ever remake “D’oh In The Wind” then the music is right here, and maaaannnn  “Raw Rock Fury” is positively scary.

Back in February we made Ecstatic Vision the band of the day on this very site. And they described their music, thus: “With Raw Rock Fury, we set out to make an album that would remind listeners of what an unpolished, dangerous rock recording should sound like. This is the opening composition entitled You Got It (Or You Don’t). Prepare for a searing mash-up of the driving rhythms of Sly & The Family Stone mixed with the sounds of Hawkwind playing Funhouse-era Troglodyte Rock.”

You might as well as subtitle this opener “you’ll get it or you won’t” because there will be no inbetween. You’ll either totally buy into the four songs here (helpfully they split a couple up into different parts) or you will hate it.

MV places itself very squarely and definitely in the former camp.

“….(Or You Don’t” is what it would sound like if Dave Wyndorf really let himself go and decided he really didn’t want to work another day in his life. Less of a song, more an assault on the senses, as the Philadelphia based reprobates here mix monstrous guitars with saxophone and harmonica and if the vocals of Douglas Sabolik rather get lost in it all, then no one minds too much.

From there though, things get even more strange. How is this possible? Well, listen to the three part “Electric Step” which pulses in a kind of Deep Purple way, before becoming bluesy. That is to say bluesy but only if the blues was the filthiest thing on the planet. It also contains perhaps the finest line of 2017. “I wanna feel,” offers Sabolik, “like an Electric Eel.” No, we don’t understand it either, but deny it’s genius.

“Keep It Lose” swings and is kinda rage set to funkiness and if there’s a real sense that it’s just waiting for the chance to cause trouble, then by the end it really doesn’t disappoint. Indeed, the suggestion “I wanna boogie, baby” is delivered with such lust that dancing is the last thing anyone has in mind here.

It ends with another of the three-part epics – although in reality the album is a continuous 35 minute journey – and “Twinkling Eye” appears to be summoning something dark, there is an incessant pulsing quality about its work, and the crescendo it builds to makes sure it lives up to the name of the album.

If you are going to call an album “Raw Rock Fury” then Christ, it had better sound like this. Raw, rocking and furious about something – even if you might never understand what.

You’ll love it or loathe it and what’s more Ecstatic Vision probably aren’t bothered either way. They’ve made a masterpiece and they are just fine with it.

Previous article
A Battery Of Double A
Next article
Doomsday Arrives