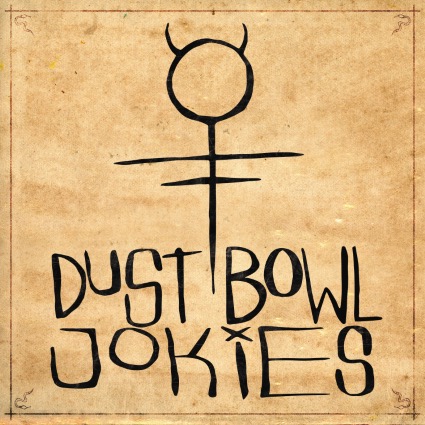 Where southern rock and hair metal meet – and it’s ace

As opening couplets go, this on the start of “Mama” the opening song here no less, is a belter: “I’ll kiss your lips if you swallow my head/and the zipper on my jeans won’t hold you back….” So sings Dust Bowl Jokies frontman Alexx with no hint of irony.

Whatever, with that DBJ are off and running, and if that takes a good deal of …..urmm…. spunk to ….errrr pull off, then you ain’t heard nothing yet.

This, the bands second album, is the follow up to “Cockaigne Vaudeville” which saw them work with Beau Hill, a man who’s finger prints were all over some of the best releases from hair metals peak (not least of which was Warrant’s equally filthy tour de force Cherry Pie, way back when. If Dust Bowl Jokies, shall we say, come at things in a more southern rock way then it doesn’t mean the sound isn’t rooted in lipstick and spandex.

The thing is they are quite superb at it. Grooves on the likes of “Moon Hanger Grove” and the darker “Borderland” are soaring and confident, and choruses? Please! Catchier than an STI but way more fun, these boys have ’em and they’ve got so many you almost wonder where they’ve come from.

If this was just some bullshit re-hash of “Open Up And Say….Ahhh” it’s be as pointless as it was dull. Instead this merrily adds a Southside Johnny type horn section, to “Canvas” – and even if these boys don’t need much excuse to get the horn, these are still welcome here.

Pink Flamingos on the other hand is arena rock to its very core, as well as borrowing liberally from Little Angels classic “Kickin’ Up Dust” from back in the day. In fact, dare we suggest that if new rock still filled arenas (or at the very least it was 1989) then DBJ would be the next cabs of the rank for MTV stardom. “Rawbone” and “Sun Of The Sun” with their soaring acoustics are designed for that very job, the latter adds a nice jazzy flourish too.

One stripped back one is enough. The rest are like M and M’s on a trampoline. “Bad Juju” is a wrecking ball of the type that grunge was supposed to kill, but it saves it’s best for last.

“Lulu” (the video is on the site elsewhere) is gonna make you shout (and yes that was intentional). It’s got a chorus that Bon Jovi used to write before they went shit, and it’s got chutzpah by the barrow load.

That too, is the best way to describe Dust Bowl Jokies and the record is tremendous fun.

Previous article
Something To Cro About
Next article
Napoleon To Depart