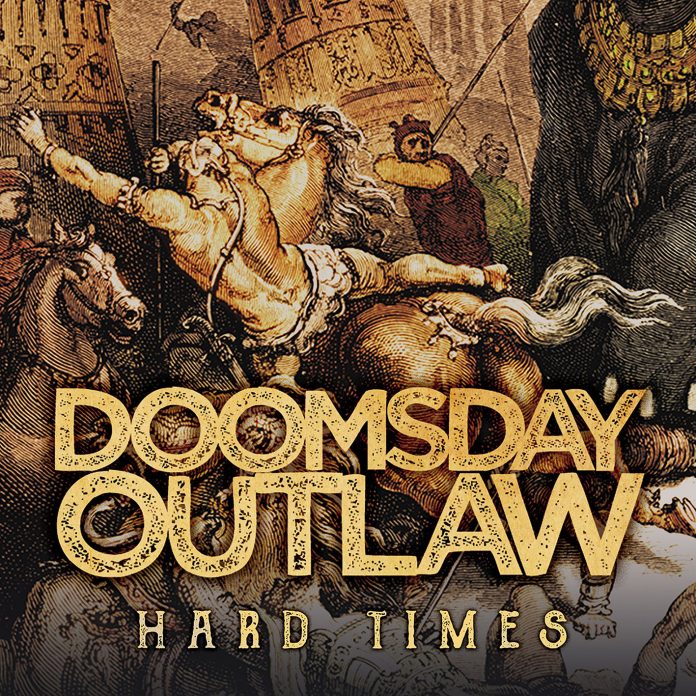 “Let’s not burden a band who has been formed for less than two years with the weight of silly expectations, but just instead say this: Doomsday Outlaw have released a brilliant record, and you need to seek them out forthwith.”

Forgive the blatant slapping of myself on the back, but I wrote those words almost three years ago on this site, after hearing Doomsday Outlaw’s debut record. In fairness, sometimes I am very wrong (to wit, the time I witnessed Muse open for Feeder in 97 and promptly dismissed them as “shit” and that they’d “never be heard of” – If I was a facetious type I’d still argue I was half right…) but it was more of an open goal with Doomsday Outlaw.   They were brilliant – in truth it might well be the best album ever recorded by an unsigned band, and they haven’t stopped since.

Fast forward to now and “Hard Times” is emerging on the Frontiers label – home to Inglorious and Wayward Sons as well as Whitesnake and other legendary acts. All that’s needed is an album to match up to such rarefied company and in that respect, “Hard Times” is the rock n roll equivalent of a tikka tape parade.

Actually, it is a brave, bold record. One that makes no bones about the fact it is aiming big. That is not to say that there is anything contrived about it, rather it is just what great bands used to do, they refined, they got better with confidence and by album number three they were ready. In that respect DO are a throwback, because, they are so ready you can almost feel it.

The title track – which kicks off this 11 tracker – is still flavoured with a sprinkling of southern rock, but it tastes more like Black Stone Cherry, say, than The Allman Brothers, something that the muscular to the point of wanting to fight you in the car park “Over And Over” continues, for no other reason than Doomsday Outlaw like it and they’re sodding good at it too.

“Spirit That Made Me” is more heavy blues tinged. A vehicle for their brilliant singer Phil Poole to scream like Robert Plant and comparisons with Led Zep here, will probably be encouraged.

That said, this is a record where the five piece widen their sonic palette. Confidence does that to a band, and that’s why they can add the piano ballad “Into The Light” to things (a little like Zakk Wylde did in Pride And Glory this makes total sense, but equally, why they can follow this up with the chest beating bombast of something like “Bring It On Home”. You’d swear they’d got Glen Hughes in to sing this such is the skill here.

A collection without let-ups either, whether the mid-paced rocker “Days Since I Saw The Sun” is actually the bid for chart glory it seems to be only they’d know, but crikey it should blast out of every radio there is this summer and even when they want to sound epic, they can pull that off with ease. After “Will You Wait” all bets are off, frankly and the soaring solo from Steve Broughton that finishes it off is taking no prisoners. It is interesting too that in an age of immediacy and fast pace, DM are more than happy to take seven and a half minutes to do their thing.

One of the most surprising things about this album compared to their other ones is just how many different styles it manages to encompass. “Break You” is downright funky, with its use of horns taking them into a place they just haven’t been before, while even though “Come My Way” isn’t what you’d call a departure, then even here, there is a self assurance in the bombast.

Even though they’re more polished than before, there’s still the Outlaw spirit. “Were You Ever Mine” starts in such a way that you know its going to cut loose at any point and the conclusion is what you might suggest, if you were so inclined, is a “Paradise City” moment.

This most wonderful of collections ends with another huge, soaring escapade. There is something of the roar of Soundgarden about “Too Far Left To Fall” and it really it is getting close to the stage where we have to start wondering just how far Doomsday Outlaw can go.

“Let’s not burden a band who has been formed for less than two years with the weight of silly expectations” might have been written three years ago, but then, there’s the nagging thought that “Slippery When Wet” was Bon Jovi’s third record and “Born To Run” was Springsteen’s. Yes the world has changed since, but surely there’s still a chance for a brilliant rock band to break through, otherwise, what’s the point? If there’s any justice left, Doomsday Outlaw are that band.