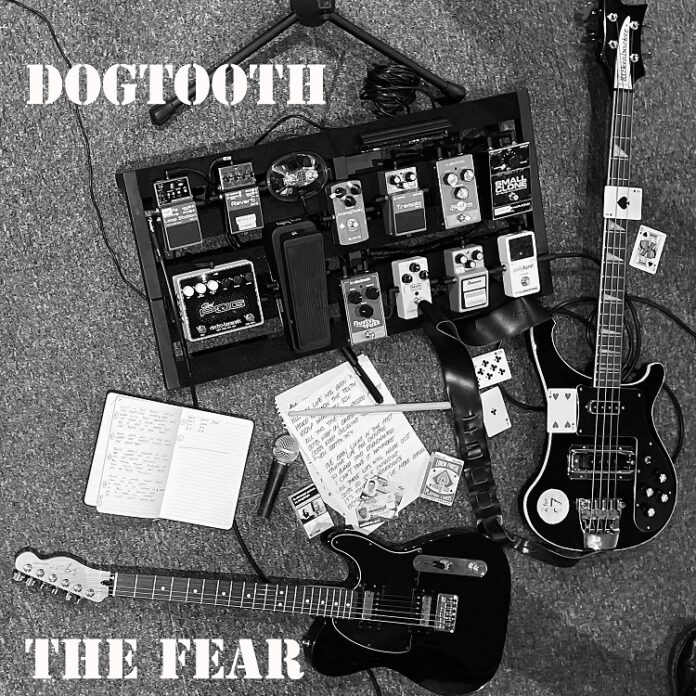 I love words, I love lyrics. Hell, most of the reviews on this site that I do, whether they are gigs or albums quite some words somewhere.

It’s somewhat contrary, then I guess, that my absolute favourite thing in rock n roll is when a guitar solo appears from nowhere and just rips it up, reaching for the sky.

The greatest moment in music? That moment in “Paradise City” after the intro when that lead break comes in.

Step forward – and indeed kudos to – John Hewitson, singer/guitarist with Dogtooth, because he essentially does this four times on “The Fear”.

The best example, perhaps is on the very last one of these four tracks. “Don’t Know Why” has been popping itself like Slow Readers Club jamming on some Oasis tracks, before a proper rock god thing happens. It’s brilliant, and its exactly the sort of energy that a young rock n roll band should have.

You can hear all that experience on the absolutely glorious opener “All I See Is Grey”, the soundtrack, surely to the type of boozy student disco that this should be made for. To give it a reference that someone my age might get, then imagine Three Colours Red had maintained the fire on that “This Is My Hollywood” EP they did for Cherry Red before Creation signed them.

When Hewitson sings “we’ll never back down!” (told you I’d get some lyrics in!) here it sounds like he’s ready to make good on the threat, while, the darker, post-punk feel of “The Fear (Is Out To Get Us)” deals with the effects of a hangover, as if its paying the price for the night before.

One thing that all these have in common, though, is choruses and sloganeering. “Served My Time” has the same driving pulse as The Music used to back in the day, but its opening line: “old enough to know better, too young to care” is something that you can see on t-shirts, and that hook? It soars. They all soar.

Produced with the assistance of Jamie Holmes (Gerry Cinnamon, Declan Welsh & The Decadent West) and Babystrange frontman and producer Johnny Madden, “The Fear” is the sound of rock n roll dreams, you imagine. The sort of thing they always envisioned in their Glasgow bedrooms as kids. More than that, however, this is a statement of intent.