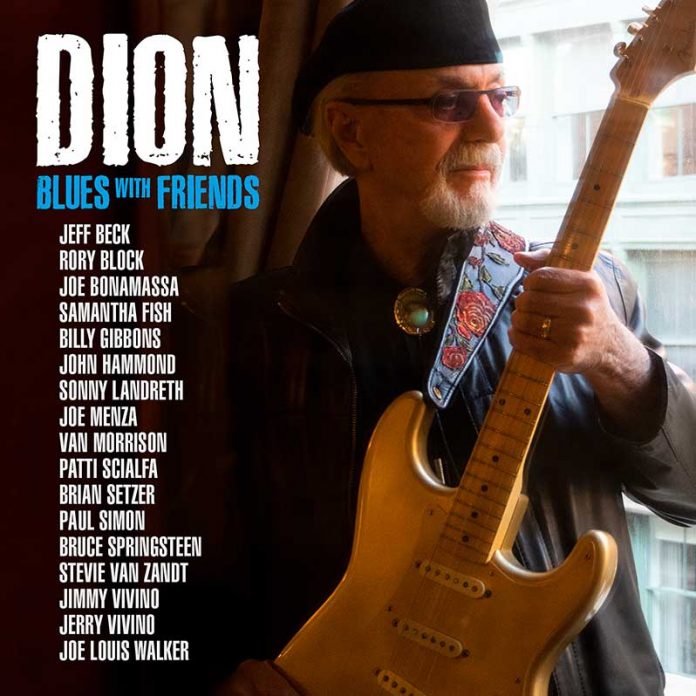 With no disrespect meant to Dion, it’s the “With Friends” bit of this that you almost have to start with. There’s no need to list all his mates, either. They are front and centre on the cover. Right there.

And he’s got a Nobel Prize winner doing the sleeve notes too. Robert Zimmerman no less, says this about Dion: “Dion knows how to sing, and he knows just the right way to craft these songs, these blues songs…… in the end, it’s Dion by himself alone, and that masterful voice of his that will keep you returning to share these Blues songs with him.”

As he so often does, there, Mr. Dylan has nailed it, because bluntly – and call me a philistine if you like – when I listen to a record, I don’t care who is playing what, I only care about the songs.

On this collection those are, for the most part, top class.

Dion DiMucci has had a career that many – even including some of the legends that are on this record – would be envious of. A quick scan of his discography reveals some of the all time great singles. The ones that the world and their dogs have heard of.

These days Dion (like Cher) he goes by one name only, plays the blues. And this, as he explained, is his dream: “I wanted an album of songs that were strong and memorable and told stories that were worth telling.”

The first one, has got Joe Bonamassa sprinkling his kind of gold dust on “Blues Coming On” and it’s a cracker. It really is. It sets the tone, kind of, too.

It’s not that these songs find a formula – quite the opposite to be fair – its just that the guests seem to find the vibe of the players, not the other way around, and that’s crucial, because it means things like “Kickin’ Child” sees Joe Menza all laid back, and Brian Setzer doing his thing on “Uptown Number 7”. Possibly the highlight, is flavoured by the Stray Cats rather than a knock off. And that’s the skill here.

“Can’t Start All Over Again” sees Jeff Beck’s guitar sound as emotional as ever, and “My Baby Loves to Boogie” is just about the most straight up blues boogie on the record. The harmonica is top notch, and John Hammond Jr. sounds like he’s having so much fun playing the solos.

Van Morrison and Joe Louis Walker both turn up for a romp around “I Got Nothin’” and the latter’s voice compliments Dion’s perfectly, but there are so many that so underline what I meant about the record not sticking to a formula. Things got soulful on the sax driven “Stumbling Blues” played by Jerry Vivino, and it’s a late night, smoky jazz, a world away from boogie, for sure.

“Bam Bang Boom” isn’t one of the diversions, actually, but the Rev. Billy Gibbons plays that thang as only he can. One of the most distinctive – and I’ll say it – best players there is, this is wonderful. The same goes, almost word for word, for “I Got The Cure” on which Sonny Landreth turns up and rips a solo out of the clear blue sky as the horns parp.

Another of the left turns though – and a genuine highlight – is the brilliant “Song for Sam Cooke (Here In America)” a fabulous thing with harmonies from Paul Simon that are simply beautiful. Modern blues star Samantha Fish is in upbeat form on “What If I Told You”, while the acoustic “Told You Once In August” is so earthy it almost tastes of clay, and the slide guitar and the soul filled backing vocals only add to the outlaw feel.

The last two on offer are both built on E.St, as it were. Stevie Van Zandt is at his short, sharp best on “ Way Down (I Won’t Cry No More)” while both Mr. And Mrs Springsteen are on “Hymn To Him”. Now, two things here, you will not find a bigger Springsteen fan than me and I don’t want to criticise anyone’s religious belief, just because I don’t have them, but this sounds like something that was left over from “Devils And Dust” and it probably should have stayed there.

That said,  “Blues With Friends” is a much better record than it might have been. I usually balk at these all-star things, but not this time. This is up there with Walter Trout’s “We’re All In This Together” for quality. Also it must be praised for having no covers on at all. Most of this sort of record sees spruced up versions of old songs, or is a tribute in some way (such as the Chuck Berry thing Mike Zito did last year that I was not fully on board with). Not here. This is all originals, all the way, and is good enough to carry Dion’s vision all the way through.