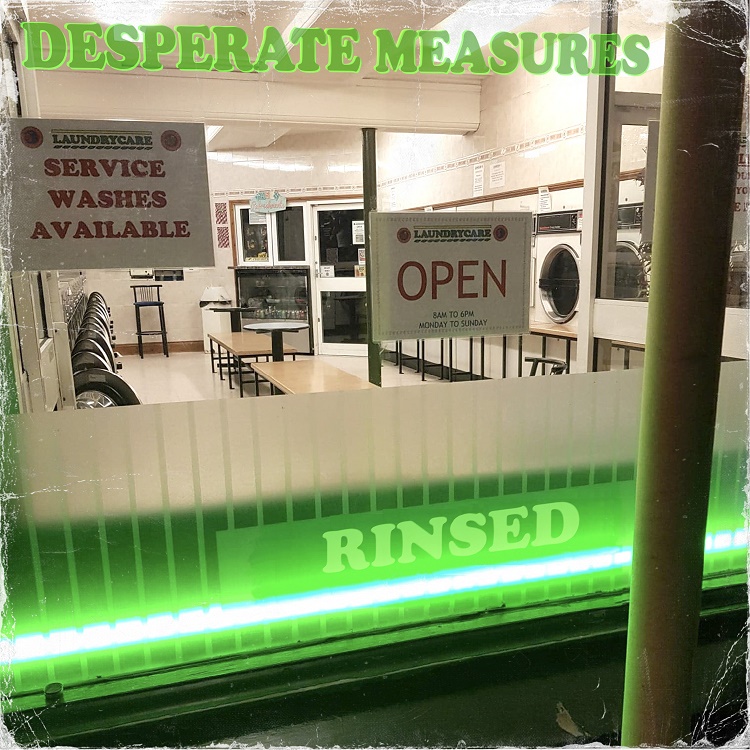 Oddly enough, I do occasionally do some research for these reviews (they aren’t all written off the top of my head as an excuse to get in as many references to the Hellacopters and early Simpsons episodes as I can in). But then, I should, probably stick to my maxim of “that’ll do”.

Take this for example, I Googled Desperate Measures to see what I could find, and the top search result was: “The largest shop in the East Midlands for all your kayaking and canoeing needs, we stock all the best brands online and in store”. I am not sure, exactly what I can do with that (there’s probably some water based joke I can do, somewhere), but surely, it’s the least punk rock thing in the world. However pleasing the image of The Clash sitting in a Kayak is (Joe would have been the cox, I reckon, but I digress) I haven’t exactly got Desperate Measures down as one of the regatta set.

It wouldn’t go well, after all, with the way that Eugene Butcher sneers “soldier of the working class, coming here to kick your ass”, on “The Rich-Tual” and my goodness, his gravel throat is perfect here.

Butcher – editor of a big music magazine for a day job – is the founder member of this group and he’s coalesced a brand new line up, to ….well, to what exactly? Who knows really, as the band all have other jobs and other projects, but that kind of doesn’t matter, because “Scars And Memories” is a truly brilliant opener, sleazy, aggressive and nasty. The bass from Ricky McGuire (ex of UK Subs and Men They Couldn’t Hang) ensures that, but whilst Butcher will always have that punk edge that he honed 40 years ago in New Zealand, this is a rock n roll band as much as anything. Gaff, once of The Glitterati, the Leeds band that if this website had been around in 2005 then christ, I’d have never shut up about (as an aside, I listened to their “Do You Love Yourself” single this week for the first time in ages and it still rules), has a natural way of playing that screams “arena rock”, which gives this an edge.

“Flowers At Your Door” takes this into a sort of The Mission, gothic place, which you imagine is more like the early part of the band, the lush keyboards give it gravitas, certainly.

“Lost And Found” is re-recorded as a tribute to the bands original member, Chris Sheehan and it sounds like the sort of thing that would have Tyla from Dog’s D’Amour licking his lips in excitement.

“No Lip” (I only know the Pistols version in honesty) is garage rock if that Garage carries knives. The fact it is live in the studio makes it even more raw, while the original demo of “…Found” is included too. It’s interesting to hear its evolution from something that appeared to be played on a Casio keyboard to what it is now.

There’s a line on that: “I live my life by a creed, of faith, hope and honesty” and it really does seem to encapsulate the vibe here throughout. There’s plenty on “Rinsed” to get anyone in a spin, but more important than a terrible pun is the desperate need that everyone in Desperate Measures seems to have to play these songs.