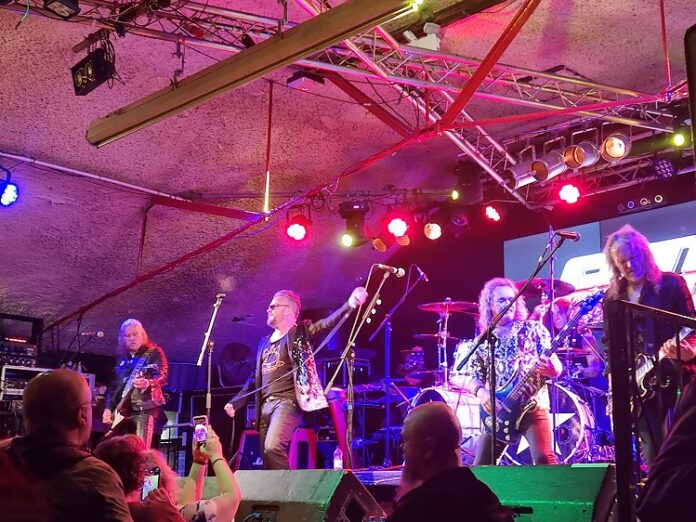 Billing themselves as powerful melodic rock, False Hearts have clearly come from the Fens to make an impression. Led by strident singer Emma Hodgson, the Cambridgeshire quartet rely on their groove. Work like “Cynical Love”, and even the balladic “Broken” have a swagger. Hodgson might be wearing a Fleetwood Mac T shirt, but their sound belongs in the modern rock era. Bands like Halestorm ah an obvious reference point and whilst that usually would be a lazy comparison, it somehow feels apt here as they play the stand out “See Me Now”. Class and quality are shot through the whole set and False Hearts might have enough to rise above the crowded pack.

Vambo proved they were an interesting band with their fantastic debut album. You can pretty much tell everything you need to know about the Londoners by the two covers they play this evening. Led Zeppelin’s “Good Times, Bad Times” and Deep Purple’s “Burn” are done with both love and skill, but also seemed to encapsulate the sound. It is though their own material that truly stands out.  “Running In Circles” Is best described as sort of Guns N Roses meets psychedelia, as the sound guitarist, Pete Lance gets belongs in arenas, but it still feels like there’s incense burning here somewhere. If their Planet Rock playlisted single “Why, Why, Why” is perhaps the stand out track, Then “Fast Car” Proves their ability still further. With the magnetic charm of Jack Stiles acting as a kind of ringmaster, and with an ear for the jam that sees drummer Steve Price gleefully soloing, There is a real feel that Vambo are making up for lost time and if they can, that time could be now.

“You bought your ABBA ticket yet?” Enquires Damien Edwards. The band he fronts are encoring. It’s about 11.30 at night, and this feels like a party. It’s not lost on anybody the song chosen to play after that Is “Hologram Man”. The song is a vitriolic attack on the fake on the bands that don’t mean it, the bands that don’t live it.

In short, the bands that aren’t Cats In Space.

If ever there was a band who embodied their sound in a breathless six years in existence, then its these boys. There’s a line in a song they play tonight, “I Fell Out Of Love With Rock N Roll” that goes: “It all comes back to zero, Can’t reinvent the wheel” and it feels like they’ve written it for themselves as much as the enthusiastic crowd.

Those that felt disenfranchised by nu-metal, or whatever other crackers genre you want to talk about, have a home here, it seems to say, and they do, because for 90 minutes, right from “Too Many Gods” to the encore, this is unashamed.

The type of gig where the words “pomp” and “grandiosity” are encouraged, whether its “Twilight” with its harmony, “Mr. Heartache” (both the current single and the first single they ever made), or the wonderful “Only In Vegas” – with the type of vibe that would make Jeff Lynne weep with pride – then simply, this is the sort of thing that is only done if you love the music.

These Cats, for all the fun and frivolity are incredible musicians. You have to be to pull the likes of “Silver And Gold” off.  It sees Greg Hart and Dean Howard duet on the guitars, and the leads are stacked high.

There’s two ludicrous pieces of pomp rock that provide the highlights too. “Mad Hatters Tea Party” and a quite incredible “The Greatest Story Never Told” end the show, underlining the prowess, but moreover, the warmth of the band.

All the way through the gig, you keep coming back to the same thought: “If Magnum went disco this would be what happened.” And, that’s not as ludicrous as it seems. There’s something else too, and it strikes me as soon as Edwards makes his grand rock star entrance with his sparkly jacket on, and its this: After the last 18 months, we all need a smile, surely. In short, we need Cats In Space and long may they purr like this.