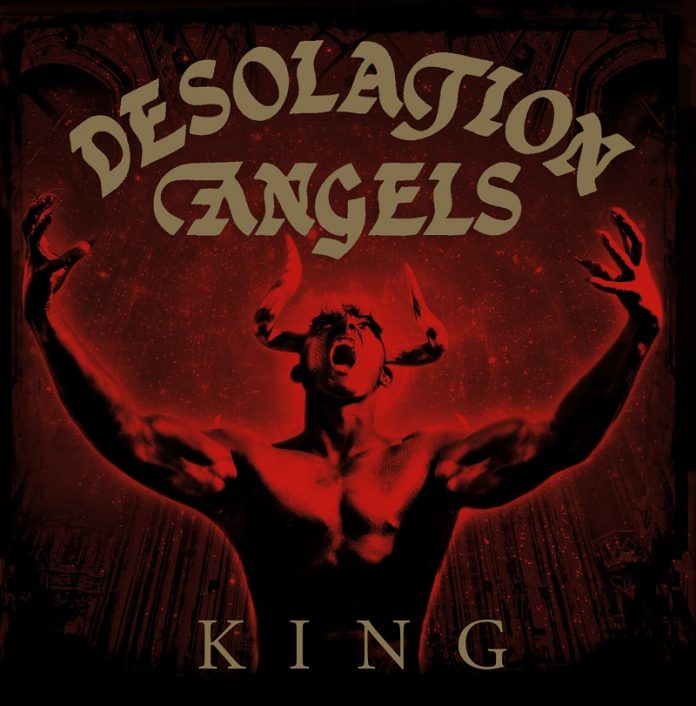 There’s going to have to come a time where we start calling the New Wave Of British Heavy Metal something else. The awful news last week that Glenn Tipton isn’t going to be touring with Priest due to the onset of Parkinson’s is an awful reminder that even the greats – the Metal Gods, no less – can’t go on forever and think on this: it is very nearly 40 years since Iron Maiden released their debut record.

For now, though, the faith is still defended by strings of bands that were around back then. Take Desolation Angels. As the press pack that came with this album put it so brilliantly: Old warriors never die. They just wait for the perfect moment to storm the walls all over again.

Desolation Angels, are exactly that. – the warriors of the century. Their debut single emerged in ’82, but although denim and leather might have brought them all together, as it were they always had loftier thoughts and ambitions. By the late 1980s they had got themselves to the US (MV actually had a copy of their second record and had no idea – at the time – that they were British).

Like so many soldiers, though, they fell at the time of grunge, but you can’t stop rock n roll, as someone once said, and now main men Keith Sharp and Robin Brancher are back with some brand-new members for a first full-length record in almost 30 years.

It is important to say that whilst “King” is resolutely a metal record (in the manner of Saxon, say, rather than Maiden or Priest) it isn’t some trad leather clad wearing dungeons and dragon’s pastiche. Rather, it has plenty of freshness in its decades old recipe.

That is laid out clearly from the get go – and incidentally what an opening track “Doomsday” really is. Full of crunch, superb lead work. And cowbell, lots of cowbell. While singer Paul Taylor sounds like he was born to do this.

Many bands like this might be able to pull off a great first song. It’s a special outfit, though, that can follow it up with an album’s worth. “Another Turn Of The Screw” seethes in a most Biff Byford type way, but it is supremely catchy too, “Devil Sent” is a huge and brooding beast, but one that recognises the need for modern fashions – and as if to emphasise the fact that this is a band that will do what it wants,  “Rotten To The Core” is both a hard rock classic and an instant highlight.

The original NWOBHM bands always recognised the need for a punk essence to things. “Your Blackened Heart” has this in abundance, and if “Find Your Life” is a change of pace, then it is a classy one, but also one which displays an absolute mastery of their craft, as it winds and builds.

That said, “King” is a record that is at its best when its racing and things are turned to 11, and “Hellfire” sounds exactly as much fun as you’d want a song with that title to be, and there are some moments of genuine pomp and ceremony too. To that end, “Sky Of Pain” has a real, unashamed power metal type groove, and on an album that is roughly split half and half between the visceral and the more involved, then “My Demon Inside” is definitely one of the latter, taking in everything from a Def Leppard-esque intro to a crushing groove.

Nine songs which maybe prove that metal will never die, sure. But also show so much more. “King” owes a debt to the past – and revels in that – but Desolation Angels know that you have to look forward too, because while the battle rages on, it also changes. It doesn’t matter whether you know the history of the band – or weren’t around when the new wave was new, all you need to know is that this“King” is absolutely regal.