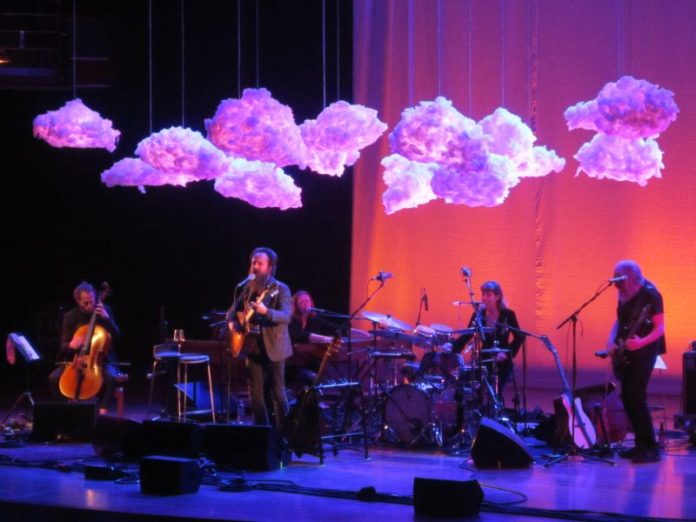 Damian appreciates the beauty in some indie folk

This was not a gathering of the Ferrous metal association over pre-dinner cocktails but Singer-songwriter Samuel “Sam” Evrin Beam and his merry troupe who comprise what is collectively referred to as Iron & Wine, The name Iron & Wine is taken from a dietary supplement named “Beef, Iron & Wine” that Mr Beam found in a general store while shooting a film. Sam is touring, not so much promoting `Beast Epic` his sixth full length studio album released August 2017, his first for four years but almost in celebration. This show was the first of his 3-date UK tour.

The band walk quietly on to the stage with minimal fuss and head into what is one of the most heart-breaking songs you can imagine with `The Trapeze Swinger` with lyrics such as “Please, remember me happily, By the rosebush laughing, with bruises on my chin, the time when we counted every black car passing” A song reflecting back on a first love, The place was so quiet which gave a really unerring feel to this wonderful track. We get the almost funky `Wolves (Song of the Shepherd`s Dog) ` before the quirky `Last Night` from the latest release. Mr Beam, over his career has written some beautiful songs, none more so than `Naked As We Come` which is shared with the compelling `About A Bruise` we are gifted songs old and new throughout tonight`s set with the upbeat `Monkeys Uptown` with it`s quite odd lyrics and thoughtful `Sodom, South Georgia`, soft and gentle `Jezebel` and quirky `Muddy Hymnal`

The band leave the stage to allow Sam to share a few numbers in a stripped back acoustic setting before returning to share a few more numbers including the stunning `Call it Dreaming` and `Fever Dream` closing out this ninety minute set.

The group return with wearing fake beards, in honour of their leaders’ distinctive facial hair to share a brief encore with `Boy With A Coin` before departing. A special mention must be made of the wonderful band that Beam has assembled for this tour with Elizabeth Goodfellow on drums/percussion, Eliza Jones on keys/organ, Teddy Rankin-Parker on cello and Sebastian Steinberg on bass. They really laid the foundation to allow Mr Beam to highlight his talents. Sam Beam or Iron & Wine has been creating his intimate neo-folk, folk rock, indie folk for over a decade and a half and now I think people are finally starting to understand what he is about. This show was a slow burner and I really feel that I only appreciated the beauty of it on reflection over the days following the show.