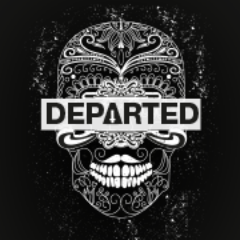 One of the finest new bands in Britain? Yep, you bet

Debut EP’S often arrive in the MV inbox, and usually do so with polite email’s suggesting that the band would be “stoked” if we review it.

So, when this, from Departed, a rock band from the West Country, landed – and to be fair, it didn’t say “stoked” or any such horrible word – it didn’t appear to be anything out of the ordinary.

First impressions, as they so often do, misled. Because there are so many reason to call this EP out extraordinary that it might not be possible to list them all.

Let’s get the obvious one out of the way first. There’s quite a cast here. The lead guitars are handled by Ben Brookland, once of The Treatment, the singer and rhythm guitarist here is Mark Pascall, frontman with the brilliant Empire Of Fools (check out their 2015 mini album right after you’ve listened to this) and the guest drummer is Chris Rivers (Heaven’s Basement).

But then as this year’s Premier League has shown, it ain’t the squad you have, it’s how you deploy the talent at tour disposal. Which leads us neatly onto this inescapable fact: this EP is astonishingly good.

Ok, so as you might guess, with these assembled personnel it’s never going to be experimental avante-garde death metal (thank Christ!) but MV will happily stick our neck on the line right now and say this: there won’t be a better debut stuck out all year.

Over the course of its bright and breezy 25 minutes and seven songs, there’s the strident groove of lead track – and first single – “All I Want”, which does a neat line in Thin Lizzy twin guitars, before soaring off into American radio rock land. Arguably even better is “Don’t Follow Me” which might have those who recall such things reaching for their Johnny Panic albums with glee. “Dreaming” takes the Heaven’s Basement playbook and wraps it around a hook, and “Pretty Little Thing” adds a bluesy twist and a glorious hook.

What sets this apart is the band sound so ready. Ready for trouble, ready for action, hell yeah – and hard rock damn well should be – but rather more prosaically you could stick this band on any arena stage as support for one of the behemoths and you’d better believe they wouldn’t be overawed.

“Steal Your Crown” would have been enough in years gone by to ensure stardom, in this modern age we’d probably best content ourselves with this thought: The Axl/DC mash up might be a bit of a car crash, but there’s bands who make something great with that legacy.

Debates about the state of the music industry notwithstanding, Departed have made a statement. It’s pretty clear. In fact its unequivocal. And if there’s any justice in the world, one day they’ll be waiting in the departure lounge for a private jet.