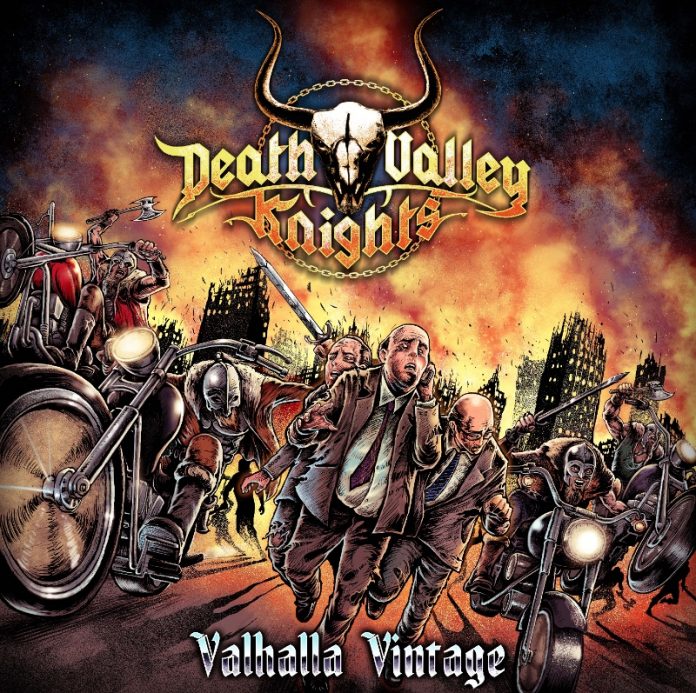 The most metal band in the UK?

When an EP starts with this as its first line: “I wet my blade on flesh and blood, moving through the dust and mud.” The obvious conclusion is that it is the new Manowar record.

Thankfully Death Valley Knights are Londoners and as such can spot the irony in a way that the leather clad trad herberts across the pond cannot. And anyway, the song that line comes from – the title cut of the EP – is not a total horns up, metal on metal pastiche.

Instead DVK understand the thought that making things contemporary isn’t a bad idea. “Be The Grizzly” for examples sounds like the power metal of Euro legend, but only after a dash of Motorhead style punk sleaze and dirt is added. That they then finish it with a NWOBHM style solo shows in microcosm their three worlds. “Legacy” on the other hand is proud of its studded belt, but is even prouder that it could be played at a biker convention.

Working with Scott Atkins (Cradle of Filth, Amon Amarth, Sylosis) has helped them take a few leaps forward here. There is a genuine undercurrent of Priest style violence about “Taste Of The Kill” but as if to prove their class there is a real groove too.

Finishing with “Shut Up And Drink” – its longest song at five and a half minutes – is a masterstroke. A very British metal record, with this cut they make clear their adoration for the first two Maiden albums, but are also savvy enough to know that there’s no point in copying the greatest band in the world.

Whilst it’s too soon to talk about torches being passed or any such hype, it is clear that with Death Valley Knights about metal ain’t about to fade away and die.