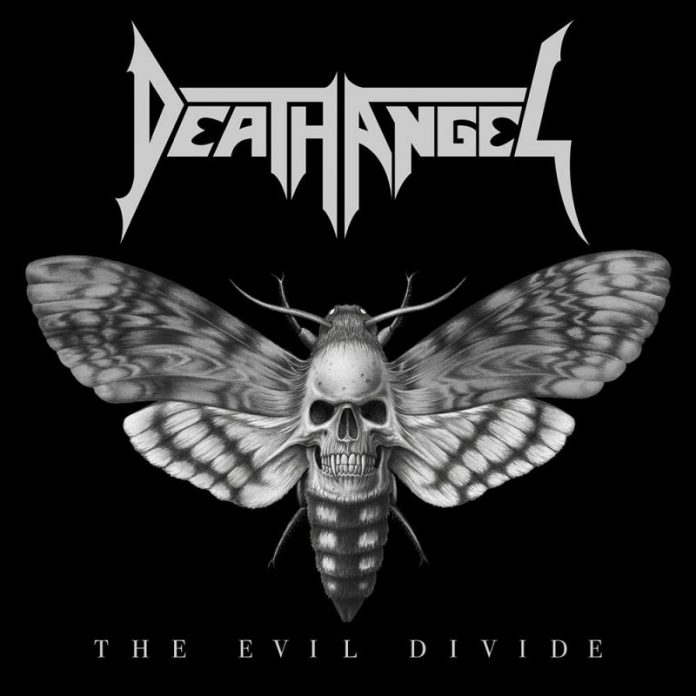 More frolics in the dark

When the gods of thrash are summoned, alongside the Big 4 (can we actually still call them that?) it might be a truism that Death Angel are not one of the names that perhaps immediately comes to mind when thinking of the kings of the genre.

And yet this does them a huge disservice for two reasons. First, their early stuff – the immense “Frolic In The Park” for example – is as good as anybody’s and since they reformed in 2004, they’ve done as much as any other band to keep the thrash flag flying in the manner that it should be.

2010’s “Relentless Retribution” and 2013’s even better “The Dream Calls For Blood” were both tour-de-force’s at a time when they genre really needed a shot in the arm, and the good news is that “The Evil Divide” makes it a hat-trick.

Every inch a modern record, it also knows that thrash metal has got to be viscous at its heart, so when Mark Osegueda (who along with Rob Cavestany remains a link with the bands past) spits out the opening line to the album, on the superb kick off “The Moth” “Surprise! I’m back again….” He might just be talking about something more abstract than the band. He might actually thrash itself.

Certainly, as a study of where thrash metal is in 2016 “The Evil Divide” is as good as it gets, “Cause For Alarm” certainly intends to strike up mosh-pits around the world, and “Hell to Pay” is a three minute study in violence, but it can’t all be about hi-tops and beer, can it? After all that’s all been done.

So instead, while all the while retaining its ability to brutalise, the record cheerfully explores elsewhere. So it is that “Father Of Lies” is thunderous, but with a light, deft touch, and “Lost” occupies the same kind of territory that latter day Anthrax has made its own.

However, if thrash metal is to remain relevant in these times of sub genres and “core” suffix’s then it needs to remember it doesn’t need to offer answers to questions, instead to give people with no hope an outlet for their anger in a way that nothing else can. Which is precisely why “It Can’t Be This” is the type of nihilistic nastiness that makes it a real highlight, with its key line: “I don’t know what I want, but I know that it’s not this.”

If there really is no light at the end of the tunnel, then “Hatred United, United Hate” – which doesn’t confine its Slayer-isms to the title – is the result, and Death Angel have constructed something that metal needs to be right now, and if “Breakaway” finally offers some hope than it does so with fists clenched and ready for a scrap.

There are times when “The Evil Divide”  does actually seem to be channelling some kind of something from below, the intro for example the closing “Let The Pieces Fall” dips with intent, but actually hides perhaps the most heavy metal rooted, if you will, song on offer.

What it definitely does, though, is provide something special to a record that barely needs anything else to commend it, “The Evil Divide” is a quite magnificent collection of hatred.