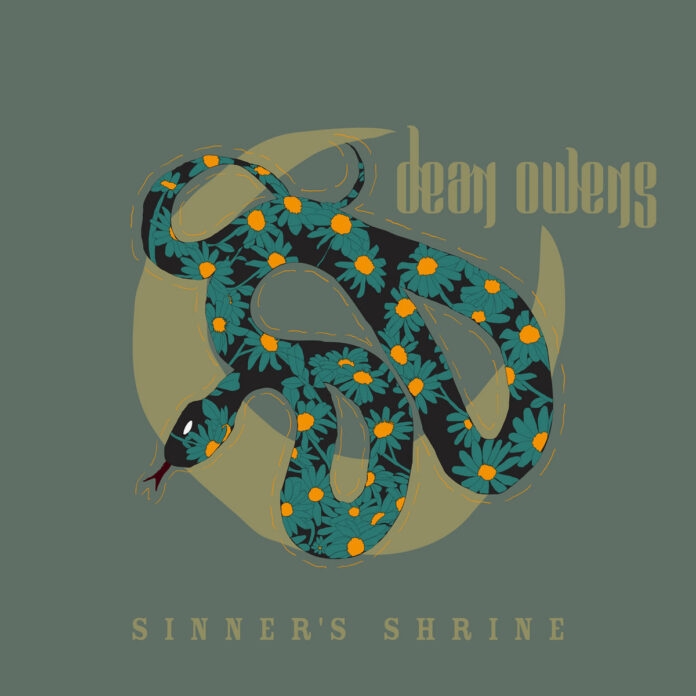 Without this hobby, I don’t know if I’d ever have heard the magical music of Dean Owens. It was his best of record that I got sent a couple of years ago – I called it “genius” and I stick by that – and then, last year, he announced plans for something of genuine, incredible ambition. A near year long project, three EP’s and then a full length record.

He recorded this in America, with members of Calexico – so of course it has a very Latin influence – and if it felt like a “big” statement to release this music in the way he did, then to listen to “Sinners Shrine” here, is to listen to something in widescreen.

Beginning with the stunning “Arizona” (the album takes its name from a line in the song), even if you hadn’t heard the EP’s and didn’t know the vibe, you’d know that this is “Americana” with the accent on “American”.  It seems absolutely hewn in the red dirt. You can conjure up any image from any Western you’ve ever seen (and its interesting, I suppose that all your cultural reference points seem so bound up in the silver screen here), but he talks about his “gypsy blood” on “The Hopeless Ghosts” (on which Grant Lee-Philips guests) and the hook line “home is the road I’m on” seems not just to sum up the life of the itinerant troubadour, but this record specifically. “There’s no town that feels like home” offers Owens, and as he travels around searching, looking, what is it he is trying to find?

Is it the lost love of “New Mexico”, the “sweet Maria” that he had to leave behind? Or is it something else? The cracked fragility of his voice on “Companera” suggests that it hides a greater sadness, particularly as the wistful trumpet wails through the darkness (and I’m picturing this as being played against the backdrop of a starry sky).

“Here Comes Paul Newman” is surely deliberately like a film score, a feeling that “The Barbed Wire’s Still Bleeding” carries on. This is the type of thing that has fascinated me ever since I read “The Grapes Of Wrath” 30 odd years ago. And it’s poetic, rugged beauty sees it build to a crescendo, one which is balanced so gloriously by “La Lomita”. Surely a mariachi band is playing this somewhere, its catchy (perhaps the most immediate of “….Shrine’s tracks) and its line “you can’t build the wall” perhaps takes on greater significance in light of populist attempts to divide us.

“Land Of The Hummingbird” is beautiful, as Gaby Moreno’s voice elevates it with its harmony – indeed the instrumentation throughout manages to do that. The record wouldn’t work without it, either.

“We Need Us” is the most “singer/songwriter” as it were, and it is a simple plea for humanity and the world, perhaps we need that more than ever right now? There’s a late night, kind of jazz touch to “Summer In Your Eyes” too, underlining the fact that you feel you are watching a series of stories instead of listening to an album.

The imagery, though, that Owens uses, is worthy of Bob Dylan (and this is not flippantly being said either). The piano led gloriousness of the last song “You shine like the road,” he sings, “after the rain”, and you know? I’d never considered that kind of glow before, but it is most certainly a different one to usual. Just as much as this is a different kind of record.

Wonderful stuff, as rugged as the rocks, and as dry as the desert sand, but still completely empathetic to its subjects. That’s why Dean Owens is the best there is, but even more so when you consider the name of that best of I mentioned was “Postcards From Leith”. This is – almost literally – a world away from that and “Sinners Shrine” amounts to a snapshot from somewhere where most of us will never go, but somehow, thanks to these sounds, we all belong in.