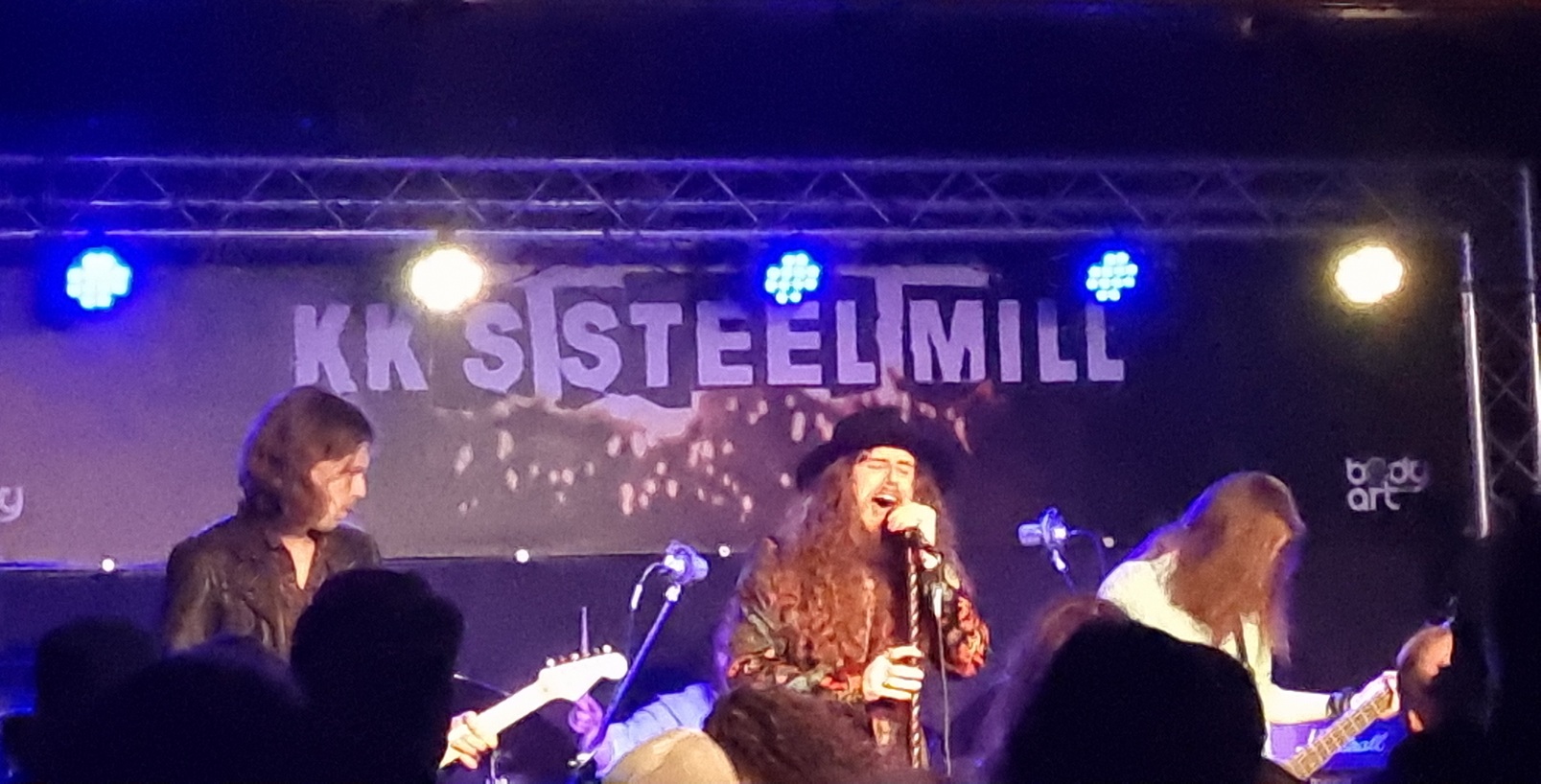 They’ve come in at short notice, but Lancashire’s Bastette are ready, dammit. When their “Exposed” record was reviewed on these pages last Autumn, the last line I used was this: “The fact is though, there’s something about Bastette that almost demands your attention.” Watching them here tonight those words ring true. There was something else I wrote in the review too that looms even larger when they are on the stage: “Caroline Kenyon is the star of the show, her vocals drive the thing,” I’d said. That doesn’t even cut it, not even close. Kenyon has one of those voices that captivate you. She is an absolutely phenomenal singer. “Sunglass” has a couple of different versions, but here, it is stunning, and the band are heavier than you’d imagined they might be. Thunderous chords and Kenyon’s wail, mean that this is a band that you need to keep a close eye on. New Song “Psycho” is indicative of what they do in that it defies you to put it in a neat box. The band likewise, there’ll be comparisons with Halestorm, but they have a way of delivering things that is all their own, and one of the songs from that aforementioned “Exposed” EP, “Rollercoaster” is a real stomping thing. A band that had seemed interesting, is always better when it elevates itself on stage in a live setting and that’s exactly what Bastette do here.

Stevie Westwood isn’t joking. “This tour was the Kiss The Sky tour, then it became the ‘we’re back’ tour, now it’s the tour that won’t quit tour”, he smiles. What the Bad Touch frontman means is 18 months ago they put out a new record, only for all their plans to be ruined, and this show has been rescheduled at least three times.

But here’s the thing about Bad Touch, you knock them down, they get up again (there’s a song in that somewhere), the first time I saw them was almost eight years ago. Their debut album was to come out the following year, and then, as now, they were fantastic.

They play a couple of tunes from it here, one “Good On Me (Jeans Song)” is fun, and the other “Waste My Time” captures the honesty that has always been at the heart of all they do. The feeling that no one here is being anything they are not, and that if they weren’t on the stage, they’d be here watching a hard rock band kick out some blues jam. In short, they are playing the music they love.

“Lift Your Head Up”, is another that bottles the essence. They have a chemistry, for sure. Rob Glendenning is a fine guitarist (together with his foil, Daniel Seekings they play a solo later in the set) and that gives “Strut” and “Dressed To Kill” an extra edge.

Then there’s Westwood himself. Always likeable and possessing a tremendous voice, his is a different kind of magnetism to that of the opener, but he was born to front a band – this band. At this point in their careers too, they have a fine collection of songs. “Too Much Of A Good Thing”, “Skyman” and “Heartbreaker, Soulshaker” provide the “engine room” to the middle of the set, and “I Get High” from the “new” album is surely one that is to be inked into their shows for years to come – and you can’t see this band not being around.

As a fan of a covers as long as they sound nothing like the originals, then Alanis Morrisette’s “Hand In My Pocket” ticks all the boxes – and they own it too. “Come A Little Closer” and the country tinged “Outlaw” (and if Bon Jovi taught us anything they taught us cowboys ride steel horses and play electric guitars) end things. Sort of. Because, as Westwood explains, “it would be lovely if you could make a noise and we will pretend we’ll play one more,” before adding “but be warned, we’re gonna play it anyway.”

“It” is “99%” and it is one of the finest hard rock songs of the last decade, it just is. It always was, and you suspect the band know it too, hence the jokey build up. It is their trump card, but its not the only ace in their pack. The rest of the 75 minutes of so had underlined that clearly

Those lines from the frontman at the start of the review? He followed them with “it’s the last night, and let’s have a party, yeah?” Well, it was. And Bad Touch were, as ever, a band you can only wish well. Plus given how hard they work at their craft, there’s probably another tour starting next week anyway.