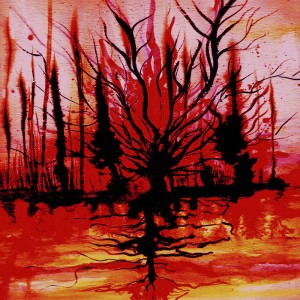 In short, what’s on offer is five tracks of raw, unremitting controlled brutality backed by some of the finest technical death metal your ears will have heard for some considerable time. The lyrics are in the band’s native German tongue, so don’t ask for a translation, however you won’t need to be a cunning linguist to get the message the band is trying to get across.

“Menschheit” is the first fist to the face and as an opening statement it makes its intentions perfectly clear. This is not going to be pretty but it is going to be effective.  Darkness pervades the soundscape and lighting fast drums kick the sound forward allowing the riffs to roll over them with all the power of a tidal wave.  There are moments when the intensity drops but they are merely the brief calm before another storm.

“Der Krieg” continues very much where the opener left off. In parts it sounds like Behemoth engaging in heated debate with Deicide.  If that combination sounds good then that’s because………….. it is.   The band came together in 1994, under a different name of Legacy,  and this is their fourth release, and arguably their best.  Tracks like this merely enforce that point and showcase how far the band have come.  Despite the attention garnered by their other bands this is far from a side project.

Enter “Winterdammerung” as further proof that this band is performing at a level that is easily comparable with their higher profile contemporaries. There is a black metal influence at work here which reveals itself in the second half of the track and plays through to its demise.

The penultimate track “Grodek” plays it straight down the line with a sludge-style riff that drags the track along at medium pace with a full throttle interlude that allows for rapid-fire drumming and familiar yet inventive death metal progression.

Finally “Erinnerungen” is a slow-burner of a track that relies on its ethereal soundscape and brooding undertones to set a final act of defiance and almost melancholic sentiment.  As a closer it works perfectly and rounds off the album is fine style.  As well as the band three hearty cheers should go to producer Jens Siefert for creating sound a rich and vibrant sound in the darkness.

Alternatively you can digitally download the album at www.deadeyedsleeper.bandcamp.com