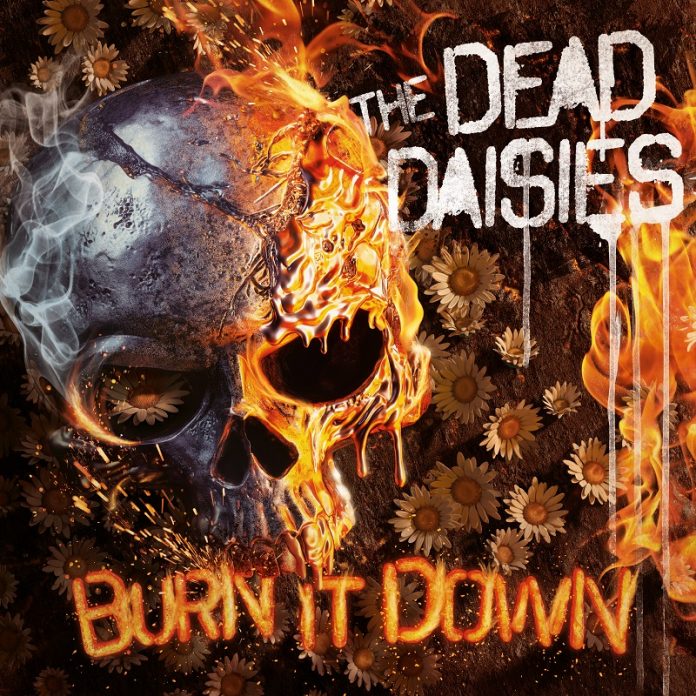 It stands out as something of an irony that the first time MV saw the Dead Daisies (albeit with a more or less totally different line up – give or take founder David Lowry) was as support to Black Star Riders. Because apart from Scott Gorham’s boys there can’t have been a more active band on Planet Rock in the intervening years.

“Burn It Down” is their fourth studio record since then, not to mention the constant touring. And if the 10-track collection is on one hand more of the same from TDD, then that rather misses the point, this is the sort of confident, classy, slightly bombastic rock n roll that bands like this should make.

Drummer Deen Castronovo (Journey) has joined the ranks for this one and the way he pummels his kit only adds to the muscular sound and with Producer Marti Frederiksen on hand to make sure the thing sounds like a million dollars, then really “…Down” in many respects just carries on the work of 2016’s “Make Some Noise.”

Frederiksen has worked with Aerosmith, and it isn’t possible to listen to the likes of “Can’t Take It With You” and not think of the legends either. Tucked towards the end of the album, it is, nonetheless the embodiment of the Dead Daisies. “You can’t take it with you,” goes the chorus, “but you can have it all before you go…..” and nothing sums up the spirit better.

Not for nothing does the album start with a mighty riff and a groove a little bit like AC/DC if they were eating barbecue in their back yard, but soon “Resurrected” sails in with a chorus designed for stadiums, and there might be someone better at screeching lead than Doug Aldrich, but where they are is not here.

That one even ends with a little stab at power metal parp, and perhaps because of this there is a real heavy chug to “Rise Up” that reminds everyone that The Dead Daisies can rock as hard as anyone out there.

The title track is an interesting one, a bluesy affair, in other hands it might brood, but these boys don’t do brooding and so it thumps, albeit with a more jam like feel. “Judgement Day” is another string to this considerable bow, and its southern rock stylings reflect the fact it was recorded in Nashville.

They are at their best, however, when they are out there beating their chests, and “What Comes Around” does that and more besides, while “Set Me Free” is proof that every record like this one needs a ballad, and this – in the mode, maybe, of  Bon Jovi’s “I’ll Be There For You” is out of the top drawer.

A band that lives for the stage – they were the first US band to play Cuba after the embargo was lifted – and armed with songs made for playing live. “Dead And Gone” is a fists in the air statement of defiance, as Corabi roars the chorus. The record ends with another warning too, and “Leave Me Alone” another which Aerosmith would kill for, is one that suggests that you should get out of their way sharpish.

Covers have always been central to their thoughts – and they always make them their own, “Bitch” here takes on a rather more hard-edged feel than the Stones, but the enjoyment comes through – as it does all the way through.

The Dead Daisies are all doing this because they love it, they’re all gifted too, but that doesn’t always guarantee success – as any football fan knows having good players is only half the battle, you need chemistry, to mix in with the talent. The Dead Daisies have the full package and right now, they are basically unstoppable.