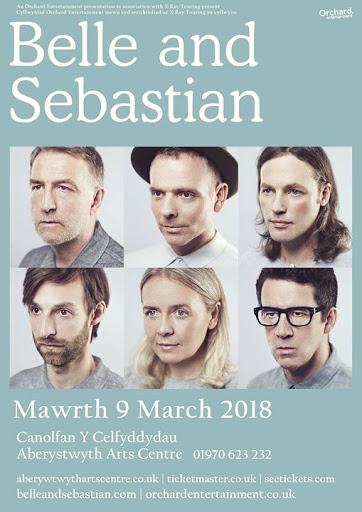 I was a bit disappointed to find Belle and Sebastian weren’t playing my home town of Birmingham, but luckily noticed the Aberystwyth date.

Support was from Julien Baker who is on the same label as tonight’s bill-toppers. Her solo debut Sprained Ankle was recorded with her friend when she was only 18, and received rave reviews. Centred around Baker’s voice, her guitar, and honesty the songs in the set were bleak and honest, sometimes melancholy and sometimes hopeful, reflecting the life experiences of this young singer songwriter.

Drawing almost equally from her two albums to date, 2015’s debut Sprained Ankle and follow up and critically acclaimed breakthrough record Turn Out The Lights, not only do songs like ‘Appointments’ and ‘Televangelist’ demand your attention, her onstage demeanour exemplifies calm yet with an assured confidence.

The hall had great acoustics and she used effects well playing her guitar through a combination of loops and pedals, this might be folk but not as we know it. The vocal delivery was excellent if at times on the quite side. She won over the already packed room who gave the performance the respect it deserved. A great opening set.

It’s seems to have been a long wait for a Belle & Sebastian tour and to see them in this amazing arts centre in a more intimate setting is something quite different and it was obvious the acoustics would be great.

The room was full from the off with a mix of a young and older crowd and clearly some who had come along to see such a well-known band in their home town. Stuart Murdoch pretty much sussed this out immediately referring to the Belle and Sebastian virgins. As is usual at a Belle and Sebastian gig the film and photos were used and the use of the local photos taken earlier that day was a nice touch and got the crowd on side with the band quipping that they might have to play an Aber (Abba) track.

There’s an understandable buzz of anticipation around their arrival and they play a set containing material spanning their entire career rather than primarily focusing on their excellent recent trilogy of EPs.

‘Nobody’s Empire’, from Girls In Peacetime Want To Dance is as great opener and follow up ‘I’m A Cuckoo’ with it’s nod to Thin Lizzy’s The Boys are Back in Town gets the kind of reaction you would expect from an encore as does ‘She’s Losing It’ from debut album ‘Tigermilk’.

The band slipped into their surroundings with consummate ease, Stuart Murdoch looking every bit the showman playing with the audience who reacted brilliantly shouting out tracks they had waited so long to hear.

These days they are very accomplished and versatile musicians with each member playing prominent parts at various points of the show, changing instruments with ease. Belle & Sebastian are a collaborative collective who complement each other and Murdoch’s showmanship. The banter between Murdoch and Jackson is a great touch.

Tracks such as ‘Another Sunny Day’,’Perfect Couples’ ‘Sukie in the Graveyard’, and ‘Piazza, New York Catcher’ get the party started with their memorable lyrics, vibrant stage lighting and accompanying film scores. The more down beat but equally infectious ‘Like Dylan in the Movies’ was excellent.

How To Solve Our Human Problems is by no means ignored and ‘We Were Beautiful’ in the early part of the set shows just how good the new album is, and northern soul influenced ‘The Same Star’ also packs a punch towards the latter half. The singalong ‘Show Me The Sun’ has full crowd participation and Murdoch dancing on the security barrier,

Tonight’s show proves Belle & Sebastian to be one of the most engaging live acts around so charismatically proven during ‘The Boy With The Arab Strap’, where as is customary, audience members of all ages are invited onstage (and do in numbers) to dance as the band deliver a rousing finale that’s completed by an equally raucous ‘I Didn’t See It Coming’ and ‘I Want the World to Stop’.

The crowd, including the first timers were by no means done and the stomping and cheering could never have been ignored. As the band reappear Murdoch acknowledges they have made the noise of a crowd 3 times their size. The encore sees 2014’s ‘The Party Line’ keep the tempo up and ‘Sleep the Clock Around’ was an excellent end to a great show, despite someone desperately shouting for ‘Photo Jenny’ for about 10 minutes.

The crowd depart happy in the knowledge the twenty odd year wait for B&Ss first visit to the town and this evening’s gig was well worth the wait. On tonight’s reaction and given the many new found fans, I wouldn’t be surprised to be seeing Belle and Sebastian again there in the future with maybe ‘Photo Jenny’ in the set.