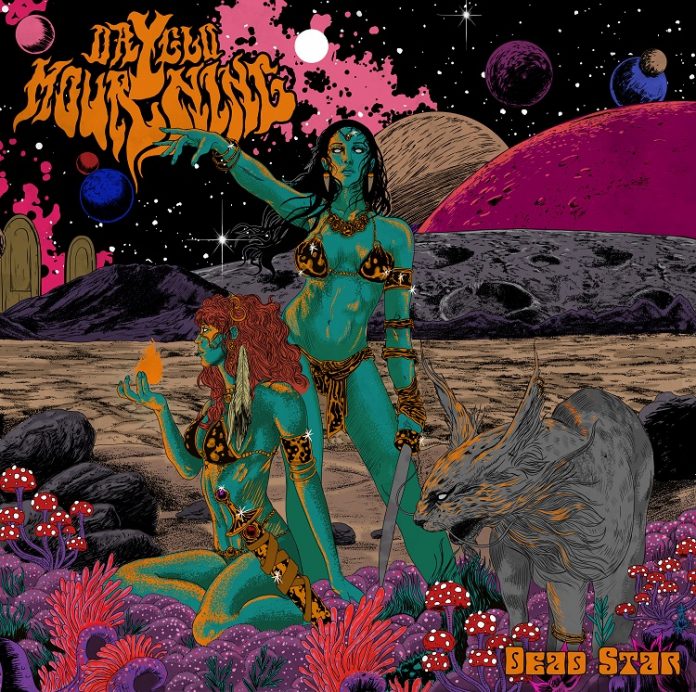 Let’s admit it before we go any further: “Dead Star” is Day-Glo Mourning’s second album, and I’ve not heard the first. So any assumptions I make on “Dead Star” are solely based on these six songs and 35 minutes.

When it comes to the Atlanta mob, though, that’s easier than you think. Because, listening to this on a grey, cold, English afternoon with sleet in the air, is exactly the type of atmosphere that “Dead Star”, deserves.

Where I am sitting is about seven miles from Aston, the hometown of Black Sabbath, and Day-Glow Mourning clearly found their hearts there too.

Because, within about five seconds of the title track in truth, it is clear what DGM are about, what they do and what they love.

This is heavy. It’s slow. It’s like Orange Goblin jamming with Crowbar. In short, its like being crushed with a Sherman Tank. It does its business slow and deliberate, but it is all encompassing.

Joseph Mills sings here (on most of them anyway) but as much as he sounds like he was born for the role, then it almost doesn’t matter as much as his quite outstanding lead guitar. The way it pierces through everything is truly what makes this special.

Jerimy McNeil – who’s bass underpins the whole journey, and this really does feel like a trip – is out front for the more swirling and floating “The Offering”, and credit too, to drummer Ray Miner who might do things more methodically than most metal, but this would not sound as good without him.

It’s this balance (and one that three pieces often find) that most sticks out here. They just seem to have a chemistry together, and if – to be totally truthful – I have no real idea what Mills is singing, it sounds particularly occult and on “Bloodghast” he sounds like he’s summoning something up from the depths of beyond as it wafts by in something of a smoke filled haze.

The bass groove of “Faithful Demise” then the riff so thick you could use it as molasses marks that one down as special, but there is plenty of light in amongst this shade too, and they know when to loosen the grip.

Beelzebub only knows what kind of incantations are being done in his name on “Ashwhore” – the heaviest of this spell, and the disembodied voices of “Witches Ladder” do nothing for the heart-rate and there is a feeling throughout that DGM are just lurking in the darkest of alleys, in some coven in a basement ready for their next ritual.

“Dead Star”, though is a fabulously conceived example of what this music can be. And if you are the type of person who likes music that seems to come in blood soaked slabs, then step right up if you dare.