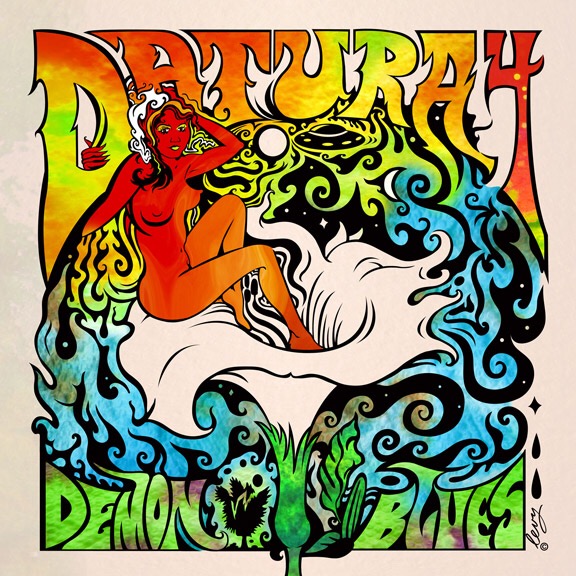 The world is gonna get you down. You might as well party. And Datura 4 want to be the soundtrack.

The opening line of “Demon Blues” tells you all need to know. “Out With The Tide” over a chugging, classic rock n roll riff: “The world I know is slowly dying,” sings Dom Mariani, “me and the boys are gonna keep on trying…..”

“The boys” are where it gets really interesting. “Demon Blues” is the band’s debut record. You can forget that. This isn’t a bunch of kids finding their way in this cold, hard rock and roll world. Mariani was in Aussie Garage Rock heroes The Stems, and fellow vocalist and bass player Greg Hitchcock made his name in the mighty and should-have-been huge You Am I.

With a pedigree like that, “….Blues” was going to have to work hard to fail. It doesn’t. It’s spectacular.

Kind of a cross between chilled out Psych rock, blues and fuzzy 1960s garage rock n roll, “You Ain’t No Friend Of Mine” manages to even sound like early Status Quo, while “Another Planet” is blissed out and summery.

Demon Blues can still rock when it wants to, and bares its teeth to great effect on songs like “Journey Home” which is in possession of a riff of great insistence, while “Hoonsville” is just a basic – and downright glorious – rock n roll wig out.

Its nice to imagine this record as a ten track vinyl LP. You’d guess that’s how the band dreamt it up. If that is the case then side two begins with the bluesy stomp of its title track, and the slide guitar-tastic “Pissin’ Up The Wall” manages to as hedonistic as its moniker suggests.

A ten tracks with very few week points, “Killjoy” fries up a mighty riff, and “Gravedigger Man” is far jauntier than you might expect it to be, and it serves up arguably its best track as last course, as Love To Burn” appears ready for action at a moments notice.

A superb album, Datura 4 manage to be even greater than the sum of their parts, and that is the biggest compliment you can pay it.

The record is released on Alive Naturalsound on 10th July